Located 20 miles east of downtown Louisville, Valhalla was designed by Jack Nicklaus and conceived by local business luminary Dwight Gahm, whose aim was to create a private golf club that he could develop into Kentucky’s premier tournament venue. Opening in 1986, the project was surely one of Nicklaus’s most challenging assignments as not only did his client have lofty expectations but also a site hamstrung by a wide variance in terrain and large flood-prone areas. Further hampering the designers were restrictions on bringing materials onto the property, which forced them to build large lakes and use this fill to create tees, fairways and greens on the low-lying areas.

Despite being relatively young, the desire to test great players under major championship conditions has forced Valhalla to go under the knife on several occasions. First there were minor adjustments and tee extensions made prior to the 1996 and 2000 PGA tournament’s. Then, as Ryder Cup 2008 approached, Nicklaus and the club made more substantial alterations, including moving the 6th, 11th and 16th greens, lowering the 8th green and adding back tees and more than a dozen bunkers. Although these recent changes have unquestionably strengthened the course for the better player, they have done little to make it more enjoyable for the average member. Many of the longer holes are now more penal while few on the course offer genuine strategic playing options. The split fairway par five 7th, for instance, is dissected by water and its main lake was enlarged to make the challenge more exciting. The hole has never really managed to find a balance between strategy and strength, however, as unless you are very accomplished the tees you play will dictate which side of the fairway you take.

Typical of many expensive modern layouts, Valhalla is best noted for its eye-catching architecture and pristine playing conditions with members generally hitting from perfect fairways and putting on slick blemish-free greens, often built with tiers and swales to complicate play. Devoid of natural contour and mostly set within the open floodplains, the front nine is dominated by gratuitous mounding and huge powerlines while, by contrast, the back nine is more undulating and heavily treed, relying less on artificial shapes it features both a well used creekside area and some steeper higher ground.

Visually and strategically a few of the early holes are a little frustrating, but things pick up from the narrow par four 5th, which plays through bunkers and then turns up into a tricky plateau target. The par three 8th is another decent hole, though a green with three levels and six target zones does seem a little excessive. On the inward half better moments include an exciting second shot over a valley into the 12th, the creekside 15th green and the uphill 17th, its target surrounded by rare but effective chipping areas. The pitch into the island 13th green is also fun to play, despite the drive having zero risk-taking possibilities as anything beyond a fairway metal will leave an impossible half-punch into a green built up on rocks and surrounded by a moat.

Purchased by the PGA of America following the successful staging of its 1996 and 2000 Championships, there is no doubt that Valhalla will appeal to those who enjoy playing where the pro’s play. The course is a long way from Nicklaus’ best, however, and is further proof that with length, green grass, space and money you can successfully turn any golf course into a championship venue. 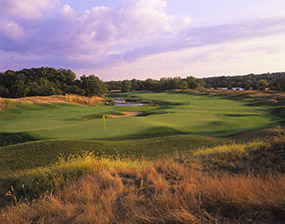