‘I see a hundred great golf holes here, my challenge is to pick the best 18.’ Tom Fazio

A private members club built on a reclaimed strip mine in southern Indiana, Victoria National was designed by Tom Fazio and is dominated by a complex system of waterways and ravines. These apparently natural features were actually a by-product of almost 50 years of mining operations on the site, the lakes formed when miners reached underground springs and the exhumed areas filled with water.

Running through the property with great irregularity, the lakes are a mix of widths and depths and often come complete with vertical cliffs crashing directly down into the water below. The ideal landscape for an eye-catching modern design, Fazio’s great achievement here was to integrate the hazards into a seamless, walkable course that both thrills the average golfer and tests the better hitters. From the back tees, the layout is a little tighter than some will expect from Fazio and the greens are also unusually steep. Many are built with effective chase-in areas, however, that allow players the option of flirting with a hazardous side by bouncing in their approach shots.

The routing is Victoria National’s real strength, however, as 12 holes touch water and the rest are blessed with enough elevation change to create interesting challenges. A river bending around the 2nd and 3rd fairways acts as a course boundary and feeds a large interior lake that the designer used to separate his two nines. Among the early highlights are the bunkerless par four 6th and the strategic mid-length 2nd, played along steep cliffs and with its green bunkered to favor a tee shot placed down the dangerous left side. The par five 3rd is also intriguing, the hole initially following the perimeter river before turning sharply inland as you near a skinny front-to-back green hidden behind a large mound.

On the back nine, the heavily treed 14th is an excellent two-shotter that rises steeply into a tiered green fronted by a large depression. The 15th is then an heroic risk/reward par five that demands an accurate drive through trees, followed by either an aggressive shot from a falling fairway over a pond or a really tight layback squeezed between water and thick native grasses. Next is part of a fine group of par threes, the 16th heading downhill to a small putting surface almost totally surrounded by trouble. Only the earlier 5th, which crosses two fingers of water and features a narrow peninsula green, is more spectacular. The final two holes complete a treacherous finishing stretch, each a long par four that bends right around the lakes. The 18th turns almost 90 degrees and is generally approached with a long iron from the neck of the fairway to a nasty green that falls toward the water.

For an architect like Tom Fazio, Victoria National was an extraordinary opportunity, as it is hard to imagine any client allowing him the freedom and budget to shape such vast lake structures. His ability to take what he was given here, and fashion an intelligent, enjoyable test out of some fairly severe features is what makes this golf club such a wonderful place to play. 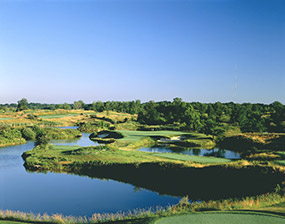 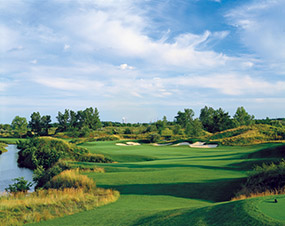 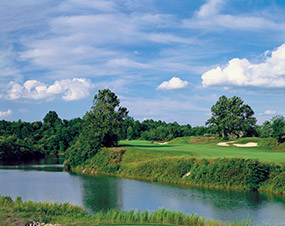