Named after a celebrated Civil War General who spent his summers in North Carolina’s Blue Ridge Mountains, the Wade Hampton Golf Club was founded by William McKee, a landowner near the small town of Cashiers whose family had purchased property from the Hampton heir’s during the 1920s. Surrounded by national park and dramatically framed by granite-faced mountains, the course was opened in 1987 and designed by the experienced, but at that stage relatively unheralded, architect Tom Fazio.

Set within a pair of enclosed valleys almost 3,500 feet above sea level, substantial earth works were required to flatten fairway areas and create landing zones, but importantly Fazio was able to arrange his holes in such a manner that there is little more than 100-foot of elevation change within the entire layout. Fairways are often downhill and were carved through a magnificent collection of giant pines and deciduous hardwoods, with many holes aligned to directly face the distant peaks. A number of naturally wandering creeks and ponds were also incorporated into the routing.

The elevated opening tee provides a breathtaking view of the mountains, and a twisted valley where the first five holes are set. The rest of the course is then arranged within a larger and more expansive basin. Aside from the scenery and turf excellence, the strength of Wade Hampton are the opening and closing stretches and picturesque par threes like the 3rd, 6th and 17th, the first with a waterfall backdrop and the latter two dropping over streams toward gorgeous green sites.

Strangely the central section is rather subdued, the 11th is the only ordinary par three on the course, while longer holes like the 8th and 10th tend to fight the shape of the terrain a little. Tempting length par fours like the 7th and 12th are also fairly ineffective, the 12th an attractive looking hole but one that rises along a narrow ridge that is too steep to entice most players from using more than a 3-iron from the tee. The run home from here, however, is very good, particularly plateau green complexes at the 13th and 15th, and the long par four 16th, which bends around trees then slowly rises into a large target bunkered strategically to reward golfers able to take the inside line with their drive. Completing a fine finishing stretch is the reachable par five 18th, which features an enticing green entrance and a trickling hazard that runs the entire left side of the hole to catch those pushing too hard for that closing eagle putt.

Greens across the course are typically quick and undulating, while the fairway landing areas are regularly framed by Fazio’s bold bunkering. As befits a national club of such esteem, the grooming here is first rate, although the climate really only allows for a couple of months of firm and fast conditions. The course, however, is a visual feast year-round, but most especially during Fall when the forest comes alive with color.

Completed a couple of years prior to Shadow Creek, Wade Hampton was the course that really sent Fazio’s career soaring and he has built few better since. With its stunning scenery, great grass and a number of beautiful holes, it is unlikely that many golfers will walk away from a round here disappointed. 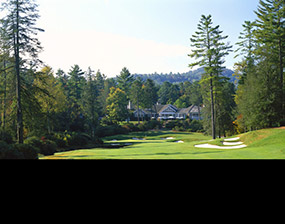 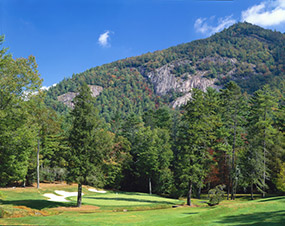