The origins of the Winged Foot Golf Club date to 1920, when a group of keen golfers from the New York Athletic Club decided to build a golf course among the green, fertile pastures of Westchester County. Their search for suitable land brought them to the town of Mamaroneck and an elevated 280-acre property close to the established Quaker Ridge course. Following its acquisition A.W. Tillinghast, who was already prolific in the region, was appointed as golf architect and instructed to design 36 championship standard holes. Work started in 1922 with both the East and West courses opening for play the following year.

Despite occupying one of the highest points in the area, the topography at Winged Foot is actually quite flat. Tillinghast did well to incorporate some subtle ground movement into his design, but what makes these holes special is the creativity he displayed around the green sites. The core challenge across both layouts is provided by vividly bunkered targets, which are generally pitched steeply from back-to-front and complicated by side wings, ridges and false fronts. As modern putting speeds have increased, these contours have become even more severe, and perhaps more fiendish than Tillinghast could have even envisaged.

Longer, tighter, harder and more dramatic, the West Course is the club’s centerpiece and provides a comprehensive test of every facet of your game. Built on either side of the final eight holes on the East Course, its two nines are littered with long, skinny par fours, exacting par threes and tempting par fives that are really only scoring holes for long hitters who are able to keep their ball in play. Rather than easing gently into the round, the West Course opens with a rigorous stretch of holes that are as dangerous as any on the course. Aside from a number of cleverly canted green complexes, highlights of the opening nine include the gorgeously bunkered par five 9th and the short two-shot 6th, with its tiny green tucked beyond a deep bunker and easier to hit the farther and more aggressively you can drive.

On the back nine, holes within the undulating western section, such as the 14th and 15th, are outstanding as is the par three 10th, its broad green leaning toward the tee but with heavy sand on either side and some torturous putting contours. The closing holes are also superb, and particularly brutal in tournament play when the narrow 16th is converted into a par four and the final two greens are rock-hard and fast. Favoring a different shape of shot from the tee, both the 17th and 18th have slender fairways and incredibly unforgiving green sites, the home hole noted for an astoundingly difficult target built into a rise and with a big false front, deep swale and steep slopes off its back and sides.

By contrast, the golf on the East Course is slightly less intense, primarily because it is shorter, more open and some of the original green slopes have been softened over the years. There are still a number of flowing and intricately shaped target areas, such as the 9th, 10th and 14th, as well as several that are abruptly angled and built atop small plateaus or steep knolls. The finishing stretch is particularly impressive, as are the early holes east of the clubhouse, which are routed across the most diverse territory on the site.

Despite superficial changes in presentation and general appearance, a look at an aerial image of Winged Foot from 1925 shows that, aside from back tees and the odd shifted bunker, structurally both layouts have been remarkably well preserved. The biggest concern is how trees have started to cramp the West Course, limbs occasionally obstructing an interesting design feature or even a direct route to the green. The putting surface on the 2nd, for example, features a marvelous back right shelf, which was clearly designed to be difficult to access after right-sided drives but is now completely blocked by trees and inaccessible for anyone not bombing long down the left.

The other concern with the modern setup of the West Course is the proliferation of back tees, which were considered essential to combat technology but jut so far into preceding fairways they compromise any sense of intimacy or flow within the routing. These problems aside, Winged Foot remains one of the foremost championship venues in America, and for most golfers a round on either of its courses will be the experience of a lifetime. 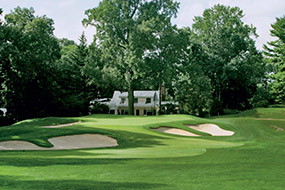 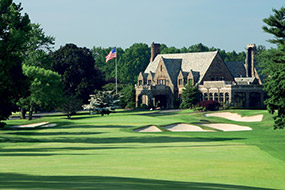