A most unusual project in almost every sense, Wolf Point is quite literally a private playground built for one man near the small Texas town of Port Lavaca. This is barren, inhospitable gulf terrain and about as far removed from the sort of site one might expect to find a high quality golf course. Laid out by Houstonbased designer Mike Nuzzo, Wolf Point is beyond just high quality; in many ways it’s groundbreaking.

Nuzzo’s client at Wolf Point was a wealthy non golfing retiree, who moved from the Bahamas to a sprawling ranch near the Texan gulf chiefly to satisfy his adventurous wife. That same wife suggested he take up golf, as much to prevent boredom as any desire to see part of her estate converted into manicured parkland. The idea took hold, and rather than join a local club they decided instead to build their own course. Nuzzo was engaged to design and construct, and largely left by the client to his own devices.

The Wolf Point layout, therefore, is almost entirely Nuzzo’s creation and was built on a minimal budget. It was constructed to be maintained inexpensively, yet provide the sort of golf that might entice, or indeed encourage, regular play. To that end the project has been a success, with the owner now a complete convert and seven-day-per-week golfing tragic.

What makes Nuzzo’s course so impressive is that his canvas for design on the surface seems rather bleak. There aren’t significant elevation changes here, or dramatic natural features, save for a creek that winds through a small section of the property. What the low-set nature of the site masks, however, is some really interesting ground movement. Movement that only appeals for golf because it has been used so cleverly within the design.

Fairways across Wolf Point are generous and softly rumpled. If the subtle contours aren’t complicating the visual challenge for the approaching golfer, they are instead directing poor shots away from pin positions or good shots back toward them. Nuzzo placed his free form teeing areas very close to preceding greens to give the course a wonderful intimacy and rhythm. He used bunkers and hazards sparingly throughout the design, preferring lively putting contours to provide the teeth. It’s true that you can blast away with a driver all day at Wolf Point, but unless hitting into agreeable areas, the approach shots will be fraught.

Similar in style and strategy to the successful links of Great Britain, the strength of the course is really the sum of its parts. Undoubtedly holes like the 5th, pushed back against the creek, and the 13th, whose fallaway green is set beyond a bunkered knob, are genuine

standouts but each of the 6th, 11th, 12th, 15th and 16th are equally outstanding. As are the shorter fours and reachable fives, each in keeping with the low-set, strategic design themes employed across the property. Wolf Point is not the sort of course likely to appeal to those who prefer a more conventional or landscaped look, nor those who feel that anorexic fairways are necessary for great golf. Golfers who like a genuine, original test of their skills and prefer to play the game along the ground, however, will thoroughly enjoy the experience. Nuzzo was unheralded before Wolf Point, and if he does nothing else in his design career can at least point to this golf course as having converted a disinterested retiree into an avid golf tragic. That in itself speaks volumes to the quality of his work here. 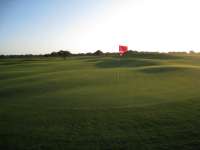 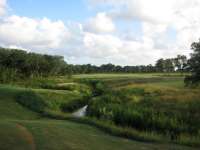 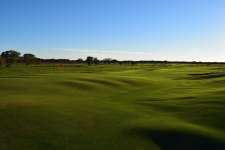