The World Woods Golf Club was developed by a Japanese corporation, who purchased more than 2,000 acres of forested land in west Florida and commissioned Tom Fazio to build them a pair of distinctive championship length golf courses. Both opened in 1993, with the Pine Barrens layout housing some of the most outstanding design elements in the Fazio portfolio.

Paying homage to Pine Valley, the native terrain here is similar to that Jersey giant with boldly undulating playing corridors cut through swathes of pine and sand. The design itself is daring and ambitious but also full of real class. Utilizing the property’s natural ground movement, Fazio mixed strategic alternate route holes with thrilling all-carry shots into distant target zones, generally building fairways and greens that rest comfortably within their surrounds. Interestingly, a number of the wider targets are open on one side but fiercely protected by steep banks, false fronts or deep bunkers on the other. The Pine Barrens experience, however, is really defined by a series of expansive sandy hazards that dominate the pine forest setting and make a big visual impression on the golfer.

The layout itself is arranged in two large adjoining rectangles, with the front nine mostly skirting the perimeter of the property and the later holes built through the interior. The opening is solid but relatively subdued, things starting to get exciting at the 4th, an heroic par five that allows the aggressive player to blast a tee shot over a waste bunker, leaving the elevated green well within range but dramatically set beyond a huge frontal trap. The 8th is also exciting, its fairway bending right around sand that runs the length of the hole and cuts in front of the green. The 9th is then a lovely rolling par four with great bunkering and a fabulous green that sits on a knob and falls away on all sides.

Full of awesome natural features and some terrific green sites, the back nine begins with a series of outstanding approach shots and a par five, the 14th, noteworthy for a massive diagonal bunker that splits the landing area for its second shot. The real stars, however, are the 12th and 15th. The long par four 12th may be brutal on the shorter hitter but good players will love the challenge of an approach played from a falling lie up over a massive bunker and into a green placed within a natural bowl. The drive here is actually played to a falling fairway, meaning that a good whack from the tee can run nearer the green, but the farther the drive the higher the second shot needs to fly in order to carry the sandy ridge. The 15th is much shorter, its fairway strategically split by an expanse of sand and its putting surface resting within an undulating basin that is partly hidden for those driving down the safer left plateau.

Rare for Fazio’s better work, World Woods is publicly accessible and moderately priced, but best of all the Pine Barrens course is fantastic entertainment. There is no doubt that some of the holes are overly difficult for longer markers, but the land pitches and falls beautifully through the pine and scrub and Fazio gets a big tick for creating a visual feast that the vast majority who golf here are bound to thoroughly enjoy. 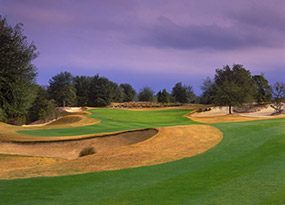 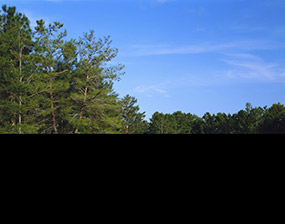