Golf at Connecticut’s prestigious Yale University dates to the 1890s, when a professor of law organized for a course to be built in New Haven for interested students and local residents. As the game’s popularity increased, students started to find it difficult to access tee times so when a 700-acre woodland was bequeathed to the school in 1924, the University decided to build its own course.

Heavily forested, hilly and full of rock and swamp, the property itself was far from ideal for golf but the founders had a generous budget and importantly managed to convince retired designer Charles Blair Macdonald to act as a consultant on their project. His associate Seth Raynor was responsible for the routing and prepared design plans for each hole, with Charles Banks supervising their construction after Raynor’s death. The process involved in building the course was so arduous and expensive that original plans to build 36 holes on the site were shelved when the first layout was completed.

When it opened, in 1926, Yale was widely hailed as the first great University course in the country. What impressed so much with the early layout was the adventurous nature of design and the scale and drama of its topography. Incorporating ponds, lakes, rocky ledges and dramatic hills and valleys into his course, the Raynor holes are noted for their wildly undulating fairways, cavernous bunkers and greens that, even by Raynor’s standards, are enormous and aggressively contoured.

Interestingly, the par threes here are the same foursome found at the nearby Fishers Island Club, and again they show the limits of imitation versus creation. Although the Short, Redan and Eden holes are quite good, they are not among Raynor’s best and these replicas do get less interesting the more of them you see. The infamous Biarritz 9th, on the other hand, is simply magnificent and more than lives up to its billing as one of America’s great par threes. Crossing a natural pond in much the same way that the original French hole crossed the ocean, the tee shot is played slightly downhill to a massive green that is 60 yards long, set at the base of a hill and sliced in two by a five-foot gully.

The par fours and fives also feature elements of the leading holes from Europe, with some interesting variations. The 17th, for instance, combines a double plateau green with a Principals Nose-style bunker complex short of the putting surface. The 8th is another Yale gem, the Cape-style par four tumbling left and featuring a sunken green tilted severely toward a 20-foot bunker on the left hand side. Other holes of note include the quirky, blind 3rd and the strategic two-shot 4th, where a brave drive close to water leaves a shorter approach into an elevated green protected by a deep Road hole-type bunker. The 18th is also interesting, the hole a long par five that will be thrice blind unless you are able to smash two big balls to the top of a large hill that runs through the center of the fairway.

Sadly, the Course at Yale has changed considerably in the years since it opened. Cart paths now scar its rugged landscape while a handful of greens and bunkers have been moved and unnecessarily recontoured. Although the layout is now a distance behind Macdonald and Raynor’s best efforts elsewhere, it does still come recommended, if only for the experience of playing what is clearly the most dramatic version of the now-extinct Biarritz hole. 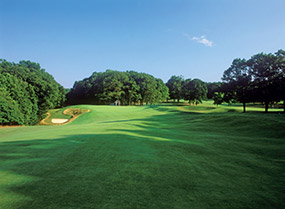 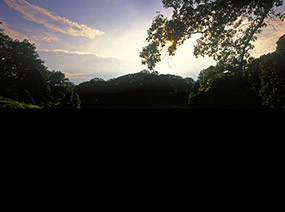