Formed by wealthy New Yorkers as a discrete winter retreat, Yeamans Hall was built within secluded woodlands on the northern outskirts of historic Charleston, South Carolina. The 900-acre site was selected for its proximity to the railway line linking the north of America to the south, and initially the club founders planned to build two golf courses here as well as more than 200 homes and a hotel. The first course, designed by Seth Raynor, opened in 1925 but the Depression soon slowed development and eventually left the club with just eighteen holes and less than 40 homes spread across its enormous property.

An intensely private club, for those fortunate enough to make it through the gates the Yeamans Hall experience starts with a long and glorious drive along an unsealed entrance road. Like stepping back in time, the drive winds through an idyllic collection of mature trees before crossing the 1st fairway, directly in front of its bizarre double plateau green. This remarkable target had actually shrunk almost in half during the decades that followed World War II, but it was mercifully rebuilt, along with the seventeen others, by Tom Doak during the 1990s. Doak’s team did an outstanding job returning greens to their original specifications, increasing their size and restoring Raynor’s false fronts, square corners and an array of interesting putting shapes that had been flattened over the years. They also reinstated a number of lost bunkers and cleared trees to open up vistas across the course.

Bordered by a tidal marshland and laid out across a surprisingly undulating savannah, Yeamans Hall is a clever and unpretentious delight that features wide playing corridors cut through a magnificent collection of moss-draped oaks and towering pines. Predictably, Raynor’s design houses a number of famous replica holes as well as enormous green sites that are protected by some of the deepest bunkers in the south. While most targets are angled abruptly forward, a couple have unique horseshoe-shaped ridges through their middle, occasionally forcing those in bad areas to have to putt away from the hole.

Aside from an immense opening green with a five-foot false front and steep back tier, outward nine highlights include the approach across trench-like traps into the sunken 5th green, the sharply leaning Redan 6th and large back-to-front greens at the 7th and 8th. The short 3rd is also fantastic, the hole dominated by a horseshoe depression through the middle of its green. Although hard on those caught on side flanks, Raynor gives golfers every opportunity to get their ball close to the pin here as the putting surface is large and most will be hitting little more than an eight or nine iron. The back nine starts with a mid-length par four that features another fearsome target, this time the green is raised, smaller and protected by deep traps, a narrow front and a central concave ridge. The immense plateau green on the 14th is equally memorable as is the huge, square putting surface on the Biarritz 16th and the unusual punchbowl green on the 17th.

Despite the quality of such holes and the ferocity of these individual green sites, some dismiss Yeamans Hall for its modest slope rating and lack of length, particularly bigger hitters who generally find themselves playing lots of short-iron approach shots. That said, the par of 70 here is no pushover, and when presented in firm and fast condition the layout still manages to provide a really thorough and utterly engrossing test for all standard of golfer. 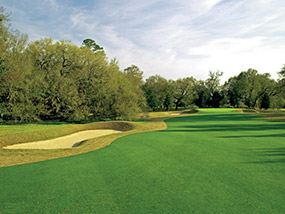 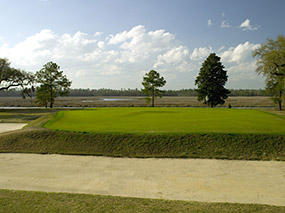