The first Greg Norman golf course to open in Vietnam, Danang was routed and designed by associate Harley Kruse shortly before Norman’s Australian office was shut down and his design operations centralized in Florida. Kruse spent many days and weeks on the ground at Danang, working on a beautifully sandy site in close proximity to China Beach, made famous during the Vietnam War as an airbase for American soldiers. His design marries classic Sandbelt-style features found on Australia’s best courses, with elements of the old British links. Add the tropical setting that is the Central East Coast of Vietnam and you have a most unusual golf experience.

Unlike the later Norman Course at Ho Tram Strip, the routing at Danang is very walkable and has both a nice flow between greens and tees, as well as regular and effective directional shifts. Wind is a factor here, and it’s nice that holes play to all points of the compass. The terrain is far less undulating and dramatic than The Bluffs, but this allowed Kruse and Norman to create some nice breather holes where golfers can push for birdie or choose to play conservatively and manage their scores.

The principal attraction at Danang is the par three 16th hole, which heads toward China Beach and features both a gorgeous sea backdrop and a somewhat radical green with a stack of internal movement. Most of the undulations here were present before the green was built, and simply incorporated into the design. A number of other greens, like the 2nd, 5th and 9th, are similarly steep and heaving. Though fun, they are slightly less effective than the bold saddle green at the 3rd, for example, or the more subtle version at the short par four 7th. The par five 12th is another highlight, with a large scrubby bunker appearing to eat right into its putting surface.

Bunkering across the course is very effective, with principal shaper Peter Waddell giving the layout a nice rugged touch by way of bunker edging and the use of native sand and vegetation in rough areas. There are nice bumps and rolls leading into some of the softer greens as well, and a general sense that the dunes and the routing marry effectively together. Apart from a couple of tee shots, this is an open and playable course that mid-to-high handicappers can handle and enjoy. It’s also a stern test for the elite golfer.

Better holes tend to be those with genuine fairway width, such as the 3rd and 4th, or the likes of the driveable 7th, with its elongated carry bunker and enticing green complex. From the regular tee this is a terrific risk/reward hole. The short 8th is also good, and bunkered to resemble some of the great par threes on the Melbourne Sandbelt. If anything, the back nine is marginally less impressive than the front, save for the signature 16th and undulating longer holes at the 12th and 13th.

Danang is an appealing holiday destination, and this course is already popular with golfers from across the Asia-Pacific region. The residential development here was kept reasonably removed from the golf corridors, and the focus on design and construction detail elevates the layout above the other offerings nearby. Although it would have been nice to use more of the beachfront land, the topography at Danang works well for golf. The holes are fun and the design strong enough to please most who travel to this part of Vietnam. 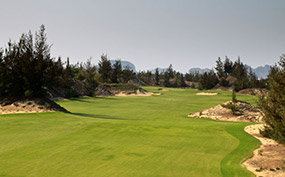 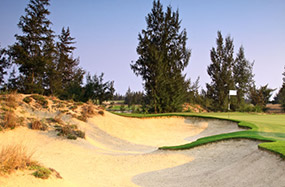 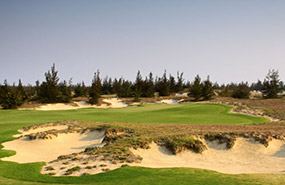