Golf development has changed in these modern times, and more and more the intrepid golfer finds himself venturing to remote, far flung corners in order to experience the latest ‘it’ destination. Such is the case with FLC Quang Binh, developed by a large property conglomerate and situated a short drive from the small rural town of Dong Hoi, on Vietnam’s north-central coast.

Here, in what appears as unlikely a place as any to discover great golf, is a project as ambitious in scale as anything we have seen. The Masterplan at Dong Hoi includes a total of ten golf courses, alongside thousands of home sites, villas and hotel rooms. All are located on a giant 2,000-ha parcel of sand south of the town.

Aside from the sheer audacity of planning ten courses in a true golfing outpost like Quang Binh province, what’s most striking about this project is the development zone itself. Glorious dunes abound all over the region, and particularly on the arrival drive into the resort.

If anything the clubhouse precinct for the first two courses underwhelms, given the building is strangely wedged between the really raw dunes along the entrance route, and those directly adjacent the sea. Views are limited, and the clubhouse serves more a functional purpose than to excite about the prospects for the golf ahead.

Sharing this clubhouse precinct with the fine Forest Dunes course is the second layout at FLC Quang Binh, known as Ocean Dunes. Of all the modern seaside courses we’ve seen in Vietnam, this is the one that suffers the most for not being allocated more prime seaside land. Whereas at Forest Dunes the topography is a little more mature, the integrated development less intrusive and the design more coherent, here you have a routing that swings toward the sea on two separate par threes only to turn straight back inland and away from what are glorious coastal dunes.

Despite concerns over the allocated land here, the holes themselves are generally well-built and attractive to play. As with Forest Dunes a number of greens feature shallow channels to divert water off the putting surface. Some work more effectively than others. Oddly, it’s the first eight holes that sit most comfortably and coherently on the landscape at Ocean Dunes, despite the back nine being blessed with the prime land and the two beach glimpses. Those earlier holes work for some subtle green and fairway undulations, and a pleasant routing that flows effortlessly from one hole to another. The course opens with a series of attractive long holes, the par five 2nd sharing its green with the par four 5th and followed by an excellent flat hole whose green is set beyond a series of sizeable undulations. Also effective are the one-shot 4th and 7th holes, and obscuring bunkers short of the 6th and 8th greens that add appeal, and a little tension, to what ought be relatively straightforward approach shots.

From the 10th hole the routing is unfortunately a little jumbled, as it twice dives awkwardly toward the sea and transitions between flatter wetland areas and some necessary project infrastructure. The floodlights are also problematic at times.

These issues aside, there are still a number of feature holes on the inward side including the par three 12th and 17th holes toward the sea, and the short par four 13th which leaves the beach and plays back across a pronounced ridge toward a hidden, angled green site. A channel lurks menacingly down the side of this hole to catch weaker balls kicking left, but for better players blasting over the ridge toward the green will be among the most enjoyable shots on the course. The other obvious highlight is the approach into the 18th green site, which is wedged between a beautiful beach-style waste bunker and a scrubby pop-up dune.

The loop toward the sea and back is common in Asia, where housing and hotels are more frequently given the choice land and golf has to work around them. Ocean Dunes has several fine holes and attractive design features, but the contrast between the two seaside areas and the inland holes is compounded by the fact that the land between is so exciting, and could so easily have been integrated into the routing. It’s true that once the development is built out the compromises made here will be less noticeable, and certainly the later designs within bigger, more glamorous dunes will elevate the golf and help ease any concerns we have with Ocean Dunes. Until then, it does feel like a lost opportunity and that with three miles of beachfront they could have allocated enough to make this course special, and kept the rest of the golf within the inland dunes. 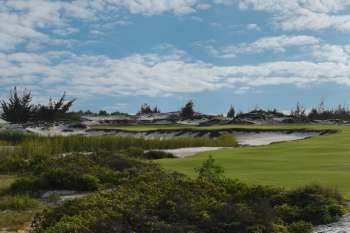 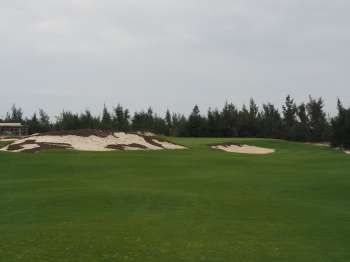 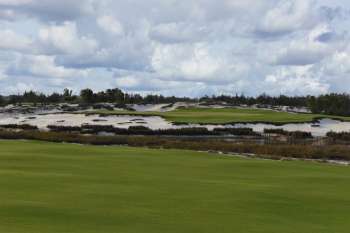