"The experience of playing true links golf among the dunes of southern Vietnam and having dramatic ocean views throughout your round will make The Bluffs Ho Tram Strip one of the most unique golf experiences in the world.” Greg Norman

The Bluffs golf development was opened in late 2014, on the Ho Tram Strip about two and a half hours southeast of Ho Chi Minh City. Designed by Greg Norman’s company, the course occupies a large sandy stretch of duneland overlooking what the Vietnamese call The East Sea. Ho Tram itself is a small, third world beach town with much of the surrounding area left undeveloped and rural. The Strip region, however, has been earmarked as a mini-Las Vegas style gambling precinct, and already boasts a 5-star hotel and casino, with plans for additional facilities in the future, along with upscale residential estates and luxury oceanside condominiums.

As with the previous Norman Course in Vietnam, outside the port city of Danang, at Ho Tram his design team was given sandy soil and a prime beachside site, with a development caveat that prevented the golf being routed directly alongside the water. Here the golf was instead pushed on the inland side of The Strip road, with the chief difference to Danang being that the steeper dunes allowed for seaside views from many points on the property. Unquestionably both courses would have benefitted from a more golf-friendly overall masterplan, but for Vietnam they are very good and sure to please the majority of resort visitors.

While there were a number of associates involved in the design and construction process at The Bluffs, they appear to have worked well to create a cohesive layout with a diverse and attractive set of green complexes. The putting contours are more adventurous than those at Danang, with elevated targets like the 4th, 7th and 10th among the most photogenic. Arguably, the more subtle targets set down on the ground are the pick, if only because they are less exposed and less punishing in the frequent high winds. Among the standouts is the brave triple-depression punchbowl green on the fun par four 8th.

Beyond green sites, the design and shaping teams deserve credit for the sculpting of some expansive dune bunker complexes and for wisely deciding to incorporate vast areas of short cut grass into their holes. It appears that Bill Coore’s Shanqin Bay course, on nearby Hainan Island, might have influenced this decision, with some of the rugged bunkers and shared fairways resembling areas on that highly rated Chinese gem.

Whatever the influence, golfers tackling The Bluffs are certain to drive off the 18th green with several strong memories of the completed round. Among them are back-to-back par threes at the 4th and 7th, with their communal teeing ground, and the horseshoe green site and central bunker on the uphill 14th. Our favorite is the par five 16th, with a shared fairway that in places has more 200 yards of width. The challenge here is not finding short grass off the tee, but instead positioning your subsequent shot near enough the secondary bunkers to leave a reasonable approach to a cleverly contoured green site. Between an upper left ledge and a lower right hollow are some of the most interesting putting undulations on the course.

The most obvious knock on The Bluffs is a significant one, and relates to the actual course routing, which doubles back on itself in a couple of spots and gets so steep in places to essentially become unwalkable. It is unlikely that resort guests will mind much, given they will almost exclusively be playing in golf carts, but the flow and rhythm of the round is important and it suffers here because of interruptions between greens and tees. There is no question that the routing plan will frustrate the purists, and equally no doubt that the course would have benefitted from a more sensible arrangement.

Regardless, The Bluffs is a dramatic course with several nice holes and scenic vistas that the average green-fee golfer is sure to enjoy. Although the strong local winds make it a more difficult overall test than Danang, from the tee The Bluffs is quite straightforward thanks to its generous driving zones and the fact that the best play on most holes is to smash your drive down the middle. Approach play is more fraught, but neither course was created to terrorize from the regular tees and those who enjoy golf in Southeast Asia, and aren’t obsessed by scoring well, are almost certain to be impressed. 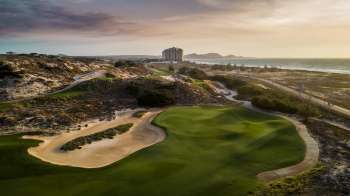 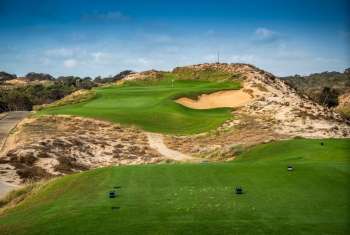 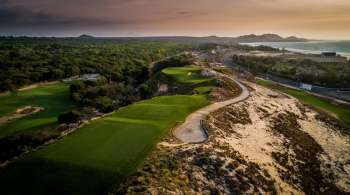 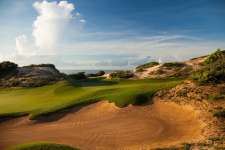 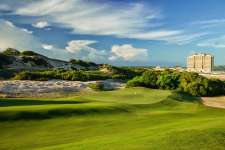 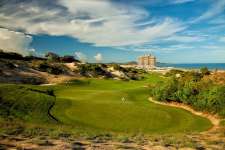 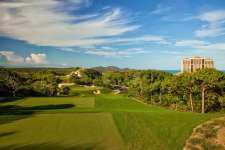