In all probability golf was first played on Welsh soil when three enthusiastic Scotsmen laid out a few roughly made holes on a spur of land known as the Morfa in 1869. It was not until 1875 that a group of members from the Royal Liverpool Golf Club realised the full potential of the area and had a professionally-designed course laid out by their club professional, Jack Morris, nephew of Old Tom Morris. Conway (Caernarvonshire) Golf Club was officially formed on the 30th June, 1890 and is the third oldest club behind Tenby (est. 1888) and Rhyl (March 1890) In 1893 Douglas Adams visited the club which resulted in his three famous paintings of the Conwy links course, “A Difficult Bunker”, “The Putting Green” and “The Drive” In 1895 the course was extended to 18 holes by Jack Morris and in the same year, Conwy Golf Club became one of the founding members of the Welsh Golfing Union.

The Morfa was badly affected by the demands of the First World War and the course, along with the surrounding area, was appropriated for military use. With the enormity of the military activities, the old links course was virtually obliterated and the course was “closed” from 1914 to 1919. To keep the club functioning, everything was moved in a northerly direction to the site that the course now occupies. When the Second World War broke out, it was decided to build the prefabricated harbours used in Operation Overlord for the invasion of Europe on the Conwy Estuary. The Mulberry Harbours were constructed on a site at the back of the present second green. This site was the location of the then ninth green which was lost and never replaced. Fortunately this was the only real damage the course suffered.

Architects
1875 – Jack Morris designed the first layout of 12 holes
1895 – Jack Morris extended course to 18 holes.
Post First World War – Unknown, records lost in the 1933 fire.
Post Second World War – Unknown to date.
Mid 1970s – Frank Pennink made major changes to the front 9 holes. This included new green complexes on the 4th, 6th and 8th holes, with consequent new tees on the 5th, 7th and 9th holes.
1983 – Brian Hugget and Neil Coles re-designed five holes on the back nine as a consequence of the new tunnel and A55 Expressway construction. This involved a new 13th hole, increasing the 14th to a par 5, while the old par 3 14th became the new 15th. The old par 3 17th was scrapped with the green and part of the old 16th fairway being utilised for a brand new par 4 17th. 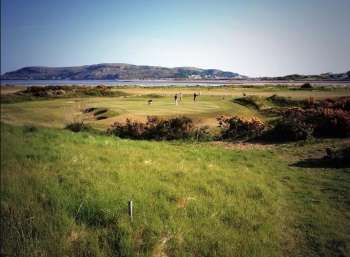