Situated on the isolated Lleyn Peninsula and reminiscent in scale and scenery of the Old Head of Kinsale, Nefyn and District is an unconventional golf club that was first founded as a village nine-holer back in 1907. The course was then extended to eighteen in 1912 before J.H. Taylor and James Braid were asked to revise the layout in the 1930’s and add an additional nine holes. Strangely, only twenty-six exist today, ten outward holes, apparently by Taylor and Braid, and two sets of inward eight.

With two distinct landforms, the early part of the Old Course is set along a vast coastal headland while its final holes occupy a tiny promontory that protrudes out from the Peninsula and rises several hundred feet into the Irish Sea. The round begins with a downhill par four played toward the coast, which is followed by a four-hole stretch that dramatically hug its cliffs. The most noteworthy of those along the headland is the almost world-class 2nd, which features a thrilling drive over the corner of the cliffs and a green perched high and close to its edge. With a more formidable greenside bunker and an angled green, this hole would be terrific and provide a real advantage for those driving nearer the sea. The solid 3rd, 4th and 5th holes also run alongside the ocean, but from the 6th the course turns away from the water and returns to the central clubhouse with the remainder of the front ten fairly pedestrian.

Part of the original short course and located on their own spectacular spit of land, the final eight holes, by contrast, are far from mundane and feature a mix of mad and magnificent golf moments. The 11th, for instance, is a short par four where the only play is to hit a middle-iron into the base of a steep hill followed by a wedge up into a blind bowl. Even more unusual is the par five 12th, its blind drive seeming to plunge straight into the sea, the fairway beneath not apparent unless you walk down the hole to confirm its existence. A busy beach road and huge bottomless pit then lurk down the left side of a heavily left sloping fairway, with smashing the ball up near the green in two about the only way to keep it in play. More conventional is the brilliant cliff-top 13th, which is played obliquely along a narrowing ridge, your drive needing to flirt with the ocean and a massive ravine in order to set up a decent shot into a small target squeezed into the Peninsula’s rocky tip. From here the course turns back for home with the par five 17th, which overlooks the earlier headlands, the most memorable of the closing holes.

In many ways Nefyn is the archetypal Welsh golf course, it is a fun layout in a stunning location let down by some ordinary design. The golf does get breathtaking in places but a number of potentially great holes are spoilt by rudimentary greens and bunkers, many being flat, uninteresting and offering straightforward recoveries. Regardless of whether this general lack of polish, or the odd mediocre hole, affects your enjoyment of the round, the attractions of Nefyn are nevertheless apparent to all who play here. 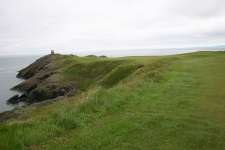 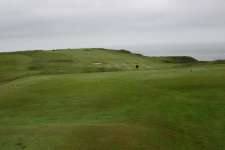 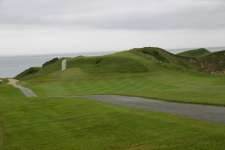 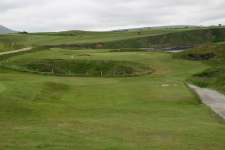