Located on the Gower Peninsula in South Wales, the Pennard Golf Club is one of the most interesting golf courses in the British Isles. Despite occupying classically undulating linksland full of bumps, humps, swales and tumbling dunes, it is actually situated some two hundred feet above the sea on a spectacular sandy promontory. The site also houses the remnants of a 13th century castle which some locals believe was cursed by vengeful gypsies when nasty castle owners turned them away during severe storms. Wild winds and sand squalls ensued covering the heads in sand, condemning the castle and bestowing to golfers this incredible, but unusual, elevated linkscape.

Golf was first played on the site in 1896, though today’s modest layout is mostly the work of James Braid and C.K. Cotton several decades later. While many will be put off by scratchy conditioning, basic green and bunker shapes and a number of blind shots, the course is a real adventure and awfully difficult for first timers especially on holes like 3, 4, 6, 8, 9 and 14 where ideal landing areas are not always apparent. Pennard's most remarkable hole is the outrageous 7th, which heads toward the sea between the castle and the ruins of an ancient church, its small green then cruelly sitting on a ledge and sloping away from play. Other genuine highlights include a number of attractive dell greens, the drive down the tumbling 10th, the heaving 14th fairway and the three cool closing holes.

Pennard is definitely not a layout for those looking for lush lies, as course conditions here are generally quite poor. For purists and links addicts, however, the tight bouncy turf is perfectly acceptable and there is much to admire about this raw and rugged golf experience. 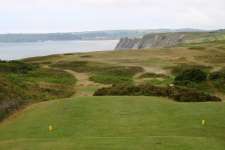 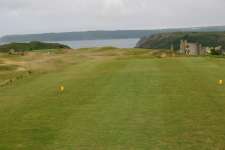 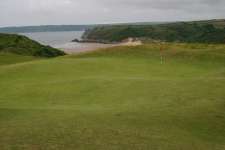 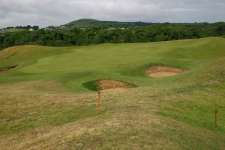 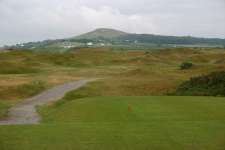