Designer: James Braid
Course Opened: 1906
The Porthmadoc and Borth-y-Gest Golf Club was first registered with the R&A in 1905 and the first hundred members paid half a guinea as membership fees. By May 1906 the nine hole course was in full use with Lord Harlech as the inaugural President.

Initially, the Club had only an annual rental agreement but in June 1910 a long term tenancy agreement was signed with the owner of Garreg Wen farm. The agreement stipulated that golfers must be on their best behaviour (as they always should be!) but in particular they were not to take any game, hares, rabbits or wild fowl and were to pay compensation for any sheep, cattle or any other animal killed or injured by them- potentially problematic as the farmer retained grazing rights other than for bulls or other “savage” cattle!  They were also not allowed to play on Sundays and not to diminish the level of water in Llyn Samson – now part of the estuary. One has to wonder what the weather was like a century ago for the landlord to be concerned about water usage. Several contemporary photos of Samson’s Bay are in the Course Gallery.
James Braid is a true legend of golf course design and has probably been involved in over 400 courses. At the peak of his activities he would often simply stroll round a course, make some simplistic illustrations on the back of an envelope and then send it together with an invoice to the Club concerned! The precise timing of his visit to Porthmadog is not known but it is likely that it was around 1910 as that was when the long term tenancy was signed and in 1911 Nisbet’s Golf Year Book lists a proposed extension to 18 holes.

Irrespective of his particular recommendations , there are certainly features of today’s course that have all the hallmarks of classic Braid design such as Par 3’s that play in four different compass directions and bunkers such as those on the 11th and 12th holes bordering Samson’s Bay.
Extract from the golf club website history. 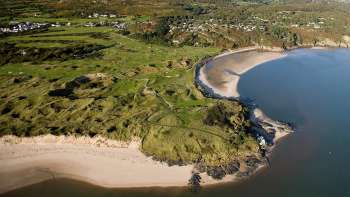