Superbly located on the Glamorgan Coast between Cardiff and Swansea, the Royal Porthcawl Golf Club was formed in 1891 by a group of Cardiff businessmen on common land in the seaside town of Porthcawl. In 1895 the club found a permanent home on an adjacent seaside site, its original layout modified in 1913 by Harry Colt and again in 1925 by the firm of Hawtree and Taylor. Tom Simpson made further alterations in 1933 with all three contributing to the quality of what is unquestionably Wales’ most significant golf course.

The course itself is situated on softly contoured linksland that overlooks the Bristol Channel and leans gently down toward its shore ensuring the water is in full view from virtually all parts of the property. Though it lacks the marked undulation and heaving sandhills that typify golf in south-west Britain, like all great links Porthcawl does enjoy tight bouncy playing surfaces, thick fescue roughs and is totally exposed to the elements coming in off the coast. Cleverly routed with the frequent high winds in mind, the layout takes full advantage of the shoreline early on, then heads into the gorse covered inland areas with holes later looping back on each another and playing to all points of the compass as they again near the shore.

The round opens with three holes adjacent to the beach, the 2nd almost in the sea with its fairway creeping down and toward a green pressed hard against the coastal fence. The 3rd also follows the fence and is a quality links hole full of natural ripples and deep traps. From here Porthcawl wanders up to higher ground where both the 5th, played into a green perched on a spur and set between an out of bounds rock wall and thick gorse, and the short 7th are fine holes. The golf then zigzags down the hill, past the narrowing and dangerously bunkered 10th green, before reaching a strong closing stretch that includes a series of tough long holes and a fabulous short par four finisher. Playing back across the first fairway, the 18th is probably the links most memorable hole as it ends with a delicious away sloping green set right in front of the sea.

Although its total yardage may seem a little light, Porthcawl is not an easy course to master with finding fairways and avoiding the hay and hazards the key to good scoring. While the narrow fairways are bunkered sparingly, the greens are generally well protected by revetted hazards that are typically deep and small but feature large collection areas that make them easier to find and usually more difficult to escape from. The turf throughout is as keen and bouncy as any you will play from and the large greens are mostly quite flat with some tiers and swales but nothing like the extravagance of a Pennard or Royal St. George’s.

An extremely consistent layout from start to finish, there is not really a weak moment at Royal Porthcawl, although the par fives are probably not its strong point as the three heading away from the sea are generally played downwind and fail to test three-shot strategies for the skilled player. The course also lacks the truly great holes which make similar low-set championship links such as Carnoustie and St Andrews so outstanding. Despite these minor shortcomings, this is still a terrific examination and clearly remains Wales’ most suitable championship venue. 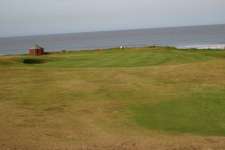 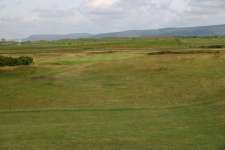 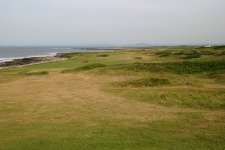