18 Holes under threat at Kennedy Bay Golf Club in WA.

According to a recent report in The West newspaper, the developer of the Port Kennedy precinct, and owner of the fine Kennedy Bay golf course, is proceeding with plans to convert a 66-Hectare parcel of land into a new residential coastal community. Unfortunately for golf, that 66-Ha parcel includes the back nine at Kennedy Bay.

The Kennedy Bay development website describes ‘upgrades’ to the golf club, in the form of a new restaurant that will be open to the general public. Sadly, there appears to be no plan to offset the loss of the back nine by building any new holes elsewhere. Upgrade indeed?

The revised Kennedy Bay development plan includes around 900 home sites as well as a sizeable commercial precinct. On the project website the 66-Hectare parcel of land is described as “unused”, which may be true in terms of extracting a profitable return on the parcel, but is clearly not the case when it comes to golfers.

KENNEDY BAY IS A 66-HECTARE COASTAL COMMUNITY IN PORT KENNEDY. IT WILL SEE AN UNUSED PARCEL OF LAND TRANSFORMED INTO AN ACTIVATED AND VIBRANT RESIDENTIAL, COMMERCIAL AND CULTURAL DESTINATION.

The area is the last north-facing developable land south of Perth – offering an exciting and rare opportunity for a bustling coastal community.

The first phase of new community infrastructure at Kennedy Bay will include upgrades to The Links golf club, including a new restaurant that will be open to the general public late 2021, and the release of the first residential lots in 2022.

The West Newspaper article included some quotes from Port Kennedy Progress Association chairman Dirk Mulder, who is said to support the ‘once in a generation’ development and is organising a public forum to provide residents with an opportunity to ask questions of the developer. In the article he describes local rumours of a new nine holes being built to the east of the course, which would obviously be welcome if indeed possible.

It would be naturally disappointing to lose nine holes on one of WA’s premier courses, and hard to see many Perth golfers making the trip south for only 9 holes. Hopefully the local community can support the course, and either keep nine open long-term or even encourage the developer to provide them with the full 18. 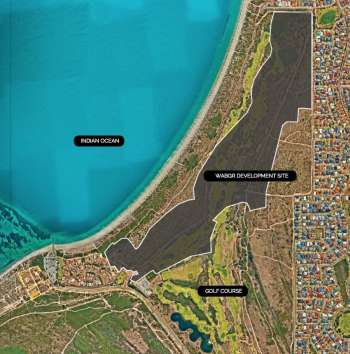