A dozen past champions return to ISPS Handa Vic Open

Twelve former champions have signed up to have another tilt at the ISPS Handa Vic Open at 13th Beach Golf Links on the Bellarine Peninsula next month.

The women’s winner, Frenchwoman Celine Boutier, is back to defend the first title of her LPGA Tour career, as well as two-time winner Minjee Lee from Perth, the world No. 9.

The field is a resounding endorsement of a tournament that, with its mixed format and informal ‘no-ropes’ atmosphere in a regional location, has won plaudits around the world for innovation.

On the men’s side, the 28-year-old Scotsman Law won his first European Tour title at 13th Beach last February with an eagle at the 72nd hole and it set him up for a consistent year on tour. Australian Hawkes, who won in 2018, also won with his own heroics on the final green.

Papadatos, the 2017 winner, has been playing nicely in Europe and Matthew Griffin, the 2014 winner, is becoming a prominent player on the Japanese tour.

The ISPS Handa Vic Open is a unique concurrent men’s and women’s professional tournament. It is jointly sanctioned by the ALPG, LPGA, ISPS Handa PGA Tour of Australasia and European Tour and features equal prizemoney for men and women, totalling $3 million.

Entry is free to all Victorian golf club members and all CFA volunteers, emergency workers and their families, but other tickets are on sale through oTix and remain some of the best value in elite sport at $10 per day, $30 for a season pass. Children under 18 and those with a Seniors Card are free.

The ISPS Handa Vic Open is proudly supported by the Victorian Government. The tournament is sanctioned by the LPGA Tour and ALPG Tour (Women's) & European Tour and ISPS Handa PGA Tour of Australasia (Men's) 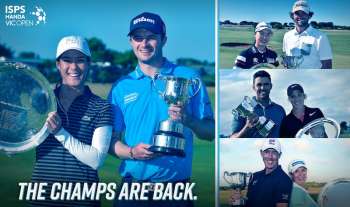