AAC to celebrate a decade of excellence in Singapore.

Founded in 2009 with the specific vision of growing the game in the region and creating new heroes, the Asia-Pacific Amateur Championship (AAC) has delivered on both counts within a short span of nine years.

Not only has the event produced champions who have become household names, but it has also become the most sought-after amateur title in the continents of Asia and Australia.

The 10th edition of the AAC, which was established by the Asia-Pacific Golf Confederation (APGC), the Masters Tournament and The R&A, will be played on the New Tanjong course at Sentosa Golf Club in Singapore from October 4-7.


A full field of 120 players from 40 countries – up from 32 when the event was first held – will vie for what has often been described as the ‘ultimate prize’ for them. The champion will earn an invitation to the 2019 Masters Tournament at Augusta National Golf Club and a place in The 148th Open at Royal Portrush in 2019. The runner(s)-up will gain a spot in The Open Qualifying Series.

The rankings of the players themselves also reflect the progress made by the region ever since the launch of the AAC.

On week 43 in 2009, when the inaugural AAC was played in Mission Hills in Shenzhen, China, only one player from the region (Daniel Nisbet of Australia at No. 47) was in the top 50. There were six others in the top 100.

If the biggest barometer of a championship’s success is the quality of its Roll of Honour, however, the AAC can proudly showcase champions like Hideki Matsuyama of Japan (winner in 2010 and 2011), Guan Tianlang of China (2012, who went on to become the youngest player to make the cut at the Masters at the age of 14 years and five months) and Curtis Luck of Australia (2016). In addition, the current list of top 100 professional players in the world features several past AAC participants, including Matsuyama, Cameron Smith (Australia), Satoshi Kodaira (Japan), Ryan Fox (New Zealand), Si-woo Kim (Korea) and C.T. Pan (Chinese Taipei).

As a two-time AAC champion now among the world’s best players, Matsuyama and his success are a true testimony to the impact of the AAC. He made the cut at the Masters both years he played as the AAC champion (T27 in 2011 and T54 in 2012), before turning professional, winning five titles on the PGA Tour and reaching as high as No. 2 in the Official World Golf Ranking.

“Winning the Asia-Pacific Amateur Championship, first in Japan and the following year in Singapore, had a great impact on my career,” reminisced the 26-year-old Matsuyama.

“The opportunities it provides, especially competing in the Masters Tournament, are a huge motivation to golfers in our region. The AAC made it possible for me to play alongside the top players in the world and inspired me to become the professional I am today.

“I know amateur players throughout Asia and the region are inspired and motivated by the AAC, not only because of the rewards for the champion, but also the elite tournament that it is – which is helping to elevate the talent and the sport itself in this part of the world.”

Luck, winner of the 2016 U.S. Amateur and the Western Australia Open as well as his AAC triumph, was equally effusive in his praise for the AAC and what it meant to the region.

“It is a championship that every amateur in the region is desperate to win,” said the 22-year-old.

“I have great memories from the 2016 Asia-Pacific Amateur Championship at Jack Nicklaus Golf Club and it crowned an amazing summer for me. The championship provides such an unbelievable opportunity for the winner with exemptions to the Masters and The Open.

“The chance to play at Augusta National was a memorable experience, and while I was not able to take up the opportunity to play in The Open, as I turned professional after the Masters, hopefully, I can play my way back into these events in the future.”

The 72-hole, stroke-play event promises to be a real festival of golf in a special year for the championship. Spectators are encouraged to watch the drama unfold at Sentosa Golf Club. Entry to the 2018 Asia-Pacific Amateur Championship is free of charge. 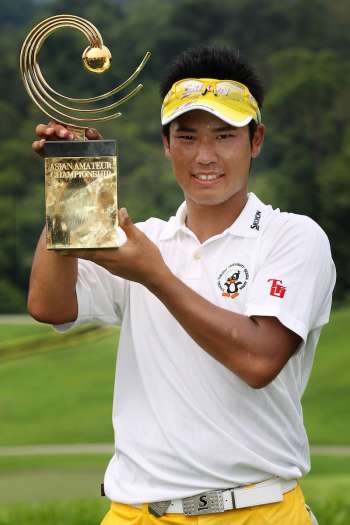