Adam Scott is making an emotional homecoming after three years to have another tilt at his home country’s national Open.

The 42-year-old Scott, still ranked inside the top 30 players in the world, announced today that he would tee it up in the ISPS HANDA Australian Open at Victoria Golf Club and Kingston Heath Golf Club from December 1-4.

Scott's impressive 2022 which has seen him play in the final 30 at the FedEx Cup and in every major for the season, will close-out with an extended stay on Aussie shores with Scott set to also compete in the Fortinet Australian PGA Championships in Brisbane, another DP World Tour co-sanctioned event, the week prior.

They will the all-time great Queenslander’s first appearances in Australia since 2019. He has previously won the Open (at New South Wales in 2009) and the PGA twice (in 2013 and 2019) and is regarded as one of Australia’s finest ever players, immortalized for his historic win at Augusta National in the 2013 Masters tournament – the first and only win in that event by an Australian.

“I’m rapt to be coming back to play for the first time in three years,” said Scott today. “It’s been way too long, but the pandemic and the travel restrictions have made it tough on everybody and obviously we’ve had a couple of events put on hold during that time.

“As a player it’s always an honour to come back and play before your home crowds. For me, that’s especially so in Queensland, but I also love playing on the magnificent courses of the Melbourne sandbelt, so I can’t wait to get back down there for both events and hopefully, get a win or two.”

Gavin Kirkman, Chief Executive Officer of the ISPS HANDA PGA Tour of Australasia, said today:
“Adam’s a legend of our sport in this country, and we always welcome him with open arms. It’s not just his playing ability; he’s been a superb ambassador for golf and at a time when the sport is really building, to have a drawcard such as Adam back at Royal Queensland and in Melbourne to play is a big shot in the arm for us.”

James Sutherland, Chief Executive Officer of Golf Australia, said: “We couldn’t be more pleased to have Adam committed to the bigger events.  It’s great to be bringing the Australian Open back to Melbourne and with a new look featuring men, women and All Abilities players competing on the same stages at the same time, and who better to be coming home to join that party than Adam Scott?

“He’s been a great supporter of Australian golf and our events for a long time, and we look forward to big crowds following him around.”

Father-of-three Scott has won 14 times on the US PGA Tour and has career earnings on that tour of more than $US 58 million, and 11 times on the DP World Tour.

His most recent tournament win was the Genesis Invitational in 2020 in Los Angeles.

The ISPS HANDA Australian Open is roaring back into action after two missing years, resuming in Melbourne with a new look – where men and women along with All Abilities players contesting the national championship will all play on the same venues at the same time. The prize pool for the men’s and women’s Opens is $1.7 million each.

The  ISPS HANDA Australian Open from 1-4 December is supported by the Victorian Government through Visit Victoria.

The Fortinet Australian PGA Championship has a $2 million prize pool in 2022, the biggest on the ISPS HANDA PGA Tour of Australasia, having resumed from the pandemic break earlier this year when local hero Jed Morgan produced a record-breaking 11-shot win at Royal Queensland.

The Fortinet Australian PGA Championship is supported by the Queensland Government through Tourism and Events Queensland and features on the It’s Live! in Queensland events calendar. 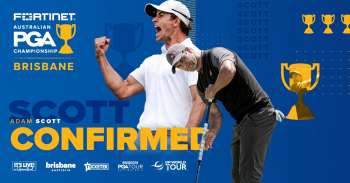