Adam Scott hungry for another Stonehaven Cup in Sydney

It’s difficult to believe Adam Scott has as many Stonehaven Cups in his trophy cabinet as he does Masters green jackets.

The premiere Australian player of his generation, Scott’s lone Emirates Australian Open title came a decade ago at New South Wales and he is as surprised as anyone that a victory which proved pivotal to his career is yet to be parlayed into more success in the national championship.

Scott fronted the local media at The Australian Golf Club this afternoon after teeing up in the morning pro-am, his first appearance since the 2016 championship.

For various reasons, the former world No. 1 skipped each of the past two championships though says he is as motivated as ever to add his name to the trophy again.

“I wish I had more than one Australian Open,” he said.

“It was a pivotal point in my career (winning in 2009). I think it was really a huge moment.

“I was 10 years into my career and I’d really struggled with my game and I came back and won the Australian Open.

“It just turned everything around and from there I played very well and obviously went on to become No. 1 a few years later.”

There have been two standout close calls for Scott in the 10 years since that triumph at a windy NSW Golf Club. One, though, clearly still smarts.

“And a few years ago here I lost by a shot to Matt Jones I believe. So I’m a little surprised that I haven’t won another Open in this 10-year stretch though I managed to get a couple of (Australian) Masters in that period and a PGA.

“But it would be nice to get my name on that cup again. It’s a great trophy and any time you see your name racking up on a trophy is quite special so this week would be the week to do it.”

He said missing the tournament the past two years had been difficult but he felt he had little choice given the demands of his PGA Tour schedule coupled with family life (he is a father of two).

“When you have a long career priorities change at different points and I try to juggle and balance so many more things today than even five years ago,” he said.

“A lot has changed for me and I feel like I give a lot of my energies away and my family misses out a lot on that.

“But I just had to take a break last year. It was important for me and it was disappointing to miss of course because I’m not going to win it not playing it.”

While the focus for the week is very much on claiming a second Emirates Australian Open next week’s Presidents Cup is also front of mind.

Scott says he believes the Internationals can win for just the second time in the event’s 25-year history though acknowledges it won’t be easy, particularly with Tiger Woods leading the team.

“Tiger is the ultimate competitor,” he said. “There’s no way he’s not doing everything possible, coming down here as a captain and a player, to win this event.

“There’s no way he wants to be the captain of a losing US team so it’s going to be very, very difficult.

Scott hits off the first tee at 11.50am on Thursday alongside Sergio Garcia and Paul Casey. 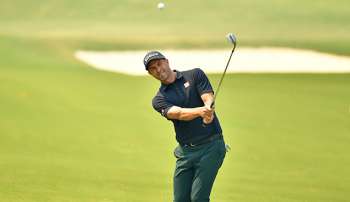