Kazuma Kobori, a 17-year-old amateur, has won the SEC NZ PGA Championship to claim his first victory on the ISPS HANDA PGA Tour of Australia.

In a dominant performance at his home course, the Pegasus Golf and Sports Club member maintained an overnight lead to win by four shots from New Zealand’s David Smail with rounds of 67, 65, 66 and 69 for a tournament total of 21-under 267.

“It feels incredible,” said an ecstatic Kobori. “It hasn’t actually sunk in yet but I think it will later on.”

“I didn’t miss too many greens today.

Consistency was key for Kobori who, after pre-qualifying for the event on Monday, recorded only two bogeys throughout the tournament.

However it wasn’t until midway through the back-9 on Sunday that the amateur realised he was about to win against a field of seasoned professionals.

“I saw the leaderboard on 14, I didn’t know it was there I just accidentally looked at it, saw that I had a four shot lead at that point and I thought that was pretty sweet.

“I just kept playing my own game and then it was all good."

Coming onto the final stretch at the Pegasus Golf and Sports Club layout, nerves weren’t an issue for Kobori who says he felt more pressure in round three.

“Not really today, I kept it calm,” said Kobori. “I think my ability to keep calm and not get too angry has helped this week.”

“I did get a bit angry out there but not too bad and I kept my composure, I thought that was the key, so I’ll take that on board for next time.”

Joining the strong crowd following the leading group was Kobori’s father, a close friend and the PGA Pro he first worked with when starting golf at 10 years old.

“It just makes it that much better I reckon. I’ve been getting messages on Facebook and Instagram as well.

“I had one friend come out today and saw him out there, so shout out to him.

Returning to school next week, Kobori will first play in a school golf tournament on Monday before taking on a regional event in the coming weeks.

“I’ve got the Canterbury Stroke Play coming up. That’s in two weeks and I’m playing at Shirley which is local as well so I’ll see if I can keep this going,” he added.

In addition to winning the NZ PGA Championship trophy, Kobori was also honoured as the leading New Zealander with the Sir Bob Charles Trophy.

Finishing runner-up at the SEC NZ PGA Championship was New Zealand’s David Smail, completing the tournament with rounds of 68, 66, 70 and 67 to finish on 17-under 271.

“I started off not feeling that confident, towards the end yesterday I started hitting some pretty bad shots so I was just trying to keep it in play,” said Smail who as the highest placed professional takes home the first place prize money of NZD $17,555.

“I putted pretty well all week, it’s probably the first time I haven’t had a 3-putt in a tournament week for a long, long time. My playing was good and I just managed to hit enough good shots to get a good score.”

Applauding Kobori for the win, Smail says he has what it takes to go far having seen him in action against his own son.

“I have seen him play. My son is playing a lot with Kazuma, so I’ve seen plenty of his play over the last few years to know that he’s a real talent. He’s done fantastic this week so it’s good for the future,” added Smail.

Victorian Cameron John has finished in third place on a total of 16-under 272 after a consistent effort across the tournament.

Three players including Blake Proverbs, Mark Purser and Anthony Quayle finished tied for fourth place on 15-under the card.

Following an upcoming break in the calendar the ISPS HANDA Tour of Australasia moves to Papua New Guinea in May for the SP PNG Golf Open to be played from 9 – 12 May, 2019. 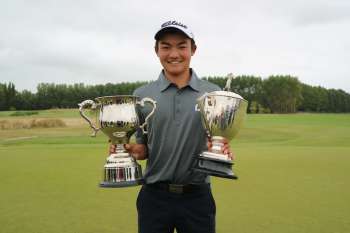