Amateurs shine through the gloom at Emirates Australian Open

Japan’s Takumi Kanaya shot the lights out at the Emirates Australian Open today, but he was not the only amateur to shine through the gloom of a hazy, surreal day at The Australian.

The smoke haze from the dozens of fires still burning in New South Wales came and went through the day, but late in the afternoon Chinese Taipei’s Chun An Yu matched Kanaya’s opening 65 and they will wake up on Friday with a share of the lead.

The conditions were so bad after lunch that Adam Scott, who faltered in an opening 75, said he felt like he needed “a full body cleanse”. Matt Jones, the 2015 national champion who shot 67, said he’d seen nothing like it. But as Scott observed: “It’s the same for everyone and we’re out here playing, so you’ve got to get on with it.”

The conditions were pristine in the morning but when the wind came up and switched to the north-east in the afternoon, The Australian was enveloped in choking smoke. It was meant to have passed, but it had not.

Kanaya and Yu lead by two shots from a cluster of players at four-under 67, including Jones, the hometown hero, another New South Welshman Dimi Papadatos and Queenslander Daniel Nisbet.

Of the bigger names, Queenslander Cameron Smith and South African Louis Oosthuizen were impressive with opening 68s, Marc Leishman was solid with a 69 and Spaniard Sergio Garcia began with a one-under 70, while England’s Paul Casey carded a 68 in the afternoon.

Kanaya won’t be collecting the prizemoney but don’t be surprised if he wins. He recently won the Taiheiyo Masters, one of the biggest tournaments on the Japanese Tour. It’s not an issue for him, although he was anxious afterwards when he pointed out “I have three more days’’.

He has an Australian coach, Gareth Jones, who ran the South Australian elite amateur program before he went to Japan a few years ago. In turn, the Japanese program has been pumping out great players, with Kanaya, an Asia-Pacific Amateur champion already, at the forefront.

He played The Australian in this tournament four years ago, and recalled shooting an 85 in the second round to miss the cut. But he picked up some things even then. “I learned (the) Australian golf style. I just (knew) Japanese golf style before 17 years old.”

Kanaya was near the lead throughout his round after four consecutive birdies on his front nine, starting from the 10thtee. But then two remarkable birdies to close, at the tough eighth and the ninth with a 10-metre bomb, put the exclamation mark on his day.

As for Chinese Taipei’s Yu, he is well and truly familiar with Kanaya’s work. The two of them have competed together on the same amateur stages, with Yu breaking a few records while playing on the University of Arizona golf team.

“I know the course a little bit,” he said. “I played great out there and hopefully tomorrow I can do it again.”

The 2015 champion Jones is the highest profile player in the group at four-under, relishing the fact that he can play at a club he joined in 1995. His highlight came at the par-five 18th, which he eagled with a putt from eight metres that he was still laughing about afterwards.

“If it didn’t go in, it could have gone in the water, the putt was going that firm,” he said. “I didn’t hit a good putt. It hit the back of the hole, popped up and went straight down. Geoff (Ogilvy, who was in the same group) and I both laughed because it was definitely going off the green.”

Jones hopes for better conditions from tomorrow. “I’m not sure what the forecast is, but the smoke’s not good at all. It’s tough to see your golf ball when you’re out there playing, where it finishes. Your eyes do burn. I’ve got that cough like you’ve got something in your lungs, phlegm in your lungs or whatever, but it’s not fun. I hope my kids are inside in the hotel room.” 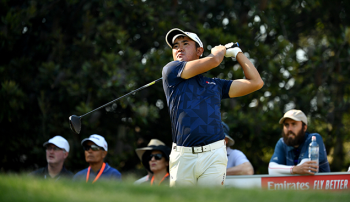