Unheralded American Derek Ackerman completed the first victory of his three years as a professional when he calmly closed out The National PGA Championship on Victoria’s Mornington Peninsula today.

Ackerman, ranked 1321 in the world, clung on to the lead he held after days one and three to win by two shots with a closing 68.

His 4-under par today in tricky winds on the Gunnamatta course at The National left him at 15-under par overall, just ahead of Australians Blake Windred, Nathan Barbieri and amateur Harrison Crowe at 13 under.

Ackerman, 25, from San Francisco, has been playing the last couple of years on the ISPS HANDA PGA Tour of Australasia without conspicuous success. Previously his only top 10 finish was in last year’s Isuzu Queensland Open last year.

But this week he birdied five of his first 10 holes in round one to start out hot, and he was at or near the lead throughout the week, negotiating Thursday’s drama when high winds forced an abandonment.

“It hasn’t hit me yet, because I didn’t know where I stood until I was coming to the last hole,” he said. “I told my caddie (trainee pro Matthew Howell) not to let me know. We had a bet that if I didn’t birdie one of the last two, I’d buy him a case. I didn’t (birdie) so I do (need to buy beers).”

Ackerman was three ahead when he pitched it to a metre and made birdie at the short par-4 12th hole today, and he was mostly steady all the way in other than a three-putt bogey at the par-3 16th hole where the margin was trimmed to two. He made commercial pars at the short 17th and the par-4 18th, tapping in at the last to seal his first victory and a $36,000 winner’s cheque.

The Californian also picks up two years’ exemption on the tour, meaning that he is likely to skip the remaining three events on this season’s tour and head home to see his family in America.

It was his past coach Alex Murray who first suggested some years ago that Ackerman head overseas to play golf.  “He wanted me to play internationally, playing different conditions, different courses. I had some connections out here to make it feel like home. I came here for a family trip three years ago, got to play Royal Melbourne, played New South Wales with my Dad. I love links golf, especially courses like this, because you have so many shots that you can hit. It’s not just a stock shot like some American golf courses. I was trying to do the Brooks Koepka path in a sense. It’s part of the path for me.”

The result was significant also for Blake Windred (67 today), who leapt Andrew Dodt and moved into second place on the Australasian Tour Order of Merit, a race that offers three DP World Tour playing cards in a couple of months’ time. Jed Morgan, who finished tied-12th today, is unassailable on top after his win at the Fortinet Australian PGA Championship in Brisbane.

The other big winner was Sydney amateur Harrison Crowe, winner of the Golf Challenge NSW Open, who backed it up with a 13-under par total and a tied-third finish to emphasise his potential.

The battle for the three European cards resumes at the CKB WA PGA Championship at Kalgoorlie Golf Club from 21 April, with three events remaining on the schedule. 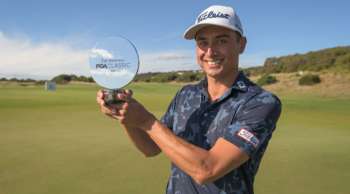