Interesting news over the past week, with independent publisher Mike Sebastian, of the Asia Pacific Golf Group, announcing that his annual golf summit had established a permanent home base at Mission Hills in China.

For the past 13 years the Asia Pacific Golf Summit has moved from city to city and country to country. Organisers have previously trumpeted the benefits of a region-wide, knowledge-sharing event that connects all areas of the industry, and to various established and establishing golf markets. Such aims are no longer relevant, given the deal with Mission Hills will, according to Sebastian, “take APGS to a whole new level and after fourteen years, the time has come to enlarge both its scope and size to better cater to and address the needs of the multi-billion dollar golf industry in the Asia Pacific.”

For Mission Hills Vice-Chairman Mr. Tenniel Chu, the association between his golf resort and the APGS is a significant milestone for Hainan Island, given its special mandate to help promote golf tourism into the country. Said Chu, “It is hoped that through this initiative, the world can be introduced to the spectacular tourism attractions of Hainan and to also be given a first-hand insight to the world class golf courses and golfing facilities on the island.”

On top of hosting the APGS, Mission Hills will, by extension, also host the annual Asian Golf Awards, touted by Sebastian as the industry’s “Oscars” and celebrated for such memorable moments as 2013 when Royal Melbourne (West) pipped DLF (India) and Sunrise Golf & Country Club (Chinese Taipei) to finish as the 7th Best Championship Course in the Asia Pacific, behind such heavyweights as Abu Dhabi Golf Club, Royale Jakarta, Kuala Lumpur Golf & CC and Mission Hills (Blackstone).

Mission Hills was also recognized last year as having the Best Food & Beverage Manager Of The Year and the 2nd Best Professional Golf Coach in Asia Pacific.

We understand that Tenniel Chu is an early favourite to join his brother in the Hall of Fame next year – which, it was announced this week, will now be permanently housed at the Mission Hills Resort in Shenzhen.

According to a news report, the permanent display for the Asia Pacific Golf Hall of Fame will be established at the Dr. David Chu Golf Museum on the grounds of Mission Hills, Shenzhen. Dr. David Chu was the founder of the Mission Hills Group that his sons now control, and one section of the Museum, which was originally his family home, will be given to the Asia Pacific Golf Group to display their many awards.

Mike Sebastian, CEO of the APGG, was delighted to be able to give his “Hall of Fame” an actual physical location. “We are honoured to be granted the use of such a historic venue to serve as the permanent exhibit hall for the Asia Pacific Golf Hall of Fame – before the end of the year we should have the tributes to the inductees proudly place on display for the public to view,” said Sebastian, who added “This is history in the making and we have Mission Hills to thank for providing such a grand venue to honour the great men and women of golf.”

The 2019 APGS and Awards will be held in India next month. 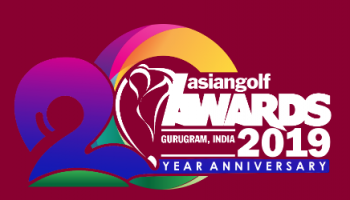