Australian golf course design company OCM (Ogilvy, Cocking & Mead), has secured approval from the members of the Medinah Country Club for plans to redevelop their historic No. 3 course.

The Victorian based designers were first engaged by Medinah to produce a Masterplan in late 2020, which was presented to members for a vote in December 2021.

Following the member vote, club President William R. Kuehn announced to the media, “It is with great excitement that I can announce that the members voted with overwhelming approval of the Course No. 3 Master Plan.”

Kuehn added, “This renovation encapsulates a continuing vision to provide compelling tournament play and a world-class golf experience for members, guests, and the professional tournament player.”

Medinah’s No. 3 Course has hosted numerous major events, including three U.S Opens, two PGA Championships and the Ryder Cup in 2012. In 2026 the club will host the President’s Cup for the first time, on the newly redesigned course. It was originally designed by Tom Bendelow in 1928, and most recently redesigned by Rees Jones.

Central to the approved OCM Masterplan was the re-arrangement of Medinah’s closing stretch of six holes, which will now include four holes along the waters of Lake Kadijah. Currently the par three 13th plays directly across the lake, much like the short 2nd and 17th holes, but it will be shifted to run alongside the water. Beyond helping reduce the sense of repetition among the par threes, the change enables the 16th hole to become a cape-style par four back across the lake.

Medinah No. 3 has always seemed a curious place for those who are well traveled, and who have been fortunate to visit the truly elite courses in world golf. It does have nice topography and space, but variety and strategy are seriously lacking and the OCM plans promise to make the overall layout much more interesting than at present.

Also included in the new plan is a large-scale putting green. The club is expected to shut their No. 3 Course toward the end of 2022, and have it back open for member play in 2024.

Interestingly, the budget announced for the redevelopment was a staggering (AUD approx) $30 million, which presumably includes things like additional sand capping, new irrigation and sub-air systems under the greens. Budgets are generally much bigger in the USA, but that’s a staggering figure regardless of the bells and whistles included.

OCM partner Geoff Ogilvy told Golf Digest Magazine that, “we feel incredibly humbled and honored that the Medinah Country Club membership voted in favor of our plan. It’s a huge sign of confidence that the members are as excited with our concept as we are, and we can’t wait to get planning started in 2022.”

With several prominent private clubs in Australia engaging American designers to reimagine their courses, it’s refreshing to see some work heading back the other way. Given the playing abilities of principals Ogilvy and Mike Cocking, one would expect a stout, attractive test at Medinah No. 3 when the new course is showcased in 2024. 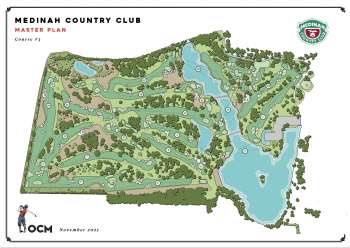