Media Release – A magical final shot by David Micheluzzi resulted in an eagle on the par-4 18th, giving the Australian sole possession of the lead after the opening round of the 10th Asia-Pacific Amateur Championship (AAC).

At Sentosa Golf Club’s New Tanjong course, Micheluzzi, ranked 13th in the World Amateur Golf Ranking, holed his second shot with a pitching wedge to post a six-under-par 64 and move one ahead of Jin Cheng, the 2015 champion from China, Lloyd Jefferson Go of the Philippines and Liu Yung-Hua of Chinese Taipei.

Playing in his first AAC, Micheluzzi seemed undaunted by the occasion as he continued what has been a remarkable season for him. Having won the Australian Master of the Amateurs earlier this year, the 22-year-old from Melbourne finished second in the Australian Men’s Amateur and was a quarter-finalist in The Amateur Championship.

“I have been working on my pitching the last couple of weeks and that was just a perfect shot,” said Micheluzzi, who also had six birdies and two bogeys in his round.

“Obviously, it is just the first round of the tournament, but it is always good to be up in the lead. I have got three more rounds to go and I just need to take it shot-by-shot really.”

Go, 23, is making his sixth AAC appearance and his five-under-par 65 becomes the lowest round by a Filipino in the AAC’s 10-year history.

“I felt I did everything very well. Unfortunately, I made bogeys on my last two holes, but otherwise I drove the ball well, hit my iron shots close and made the putts,” said Go, who had started with three birdies in his first five holes.

Jin, on the other hand, started slowly and was even par after eight holes. He then made five birdies over his next six holes and parred his way in for a 65.

“I did not have a good start, but I made some clutch putts to not fall back early. And after I made the birdie on the 18th, I gave myself chances by hitting some good drives and then converting those opportunities,” said Jin, who finished fifth last year in Wellington.

“Sometimes, having won the tournament before can have its disadvantages because there are more expectations of you. But I know I have done it once, so I can do it again. That gives me a lot of confidence.”

Liu made the turn at one-over-par 36 after a double bogey on the ninth, where he hit his tee shot out of bounds, but he made six birdies in a rousing back-nine 29.

“I didn’t expect myself to do so well, but I am very happy about the way I played,” said Liu, who has been in fine form lately and hasn’t finished outside the top 10 in his last six ranked events, which includes a victory at the Yeangder National Amateur Open.

Indonesia’s Naraajie Ramadhan and Australia’s Min Woo Lee were among a group of five players tied for the fifth place at four-under-par 66.

It was a solid round from Lee, who is the top-ranked player in the field this week at No. 9, while Ramadhan was still grappling with the tragedy caused by the massive earthquake and tsunami in Sulawesi island back home.

The 18-year-old from Badung region was emotional after his round, and it had nothing to do with the fact that he closed with a couple of bogeys in his last three holes.

“What happened back home last week has really motivated me to do well this week. I want to play here for my country and for the people of Sulawesi. They are really struggling with the earthquake and tsunami. I just hope I can win this week and make all the Indonesians proud,” said Ramadhan, who has won two professional events on the local Indonesian Tour this year.

The 10th edition of the region’s premier amateur golf tournament – organized by the Asia-Pacific Golf Confederation (APGC) in association with Augusta National Golf Club and the R&A – is being played at Sentosa Golf Club’s New Tanjong course, with the final round on Sunday.

The AAC winner earns an invitation to the Masters Tournament at Augusta National Golf Club and a place in The 148th Open at Royal Portrush in 2019, provided he retains his amateur status. The runner(s)-up will gain a spot in The Open Qualifying Series.

The 72-hole stroke play event at Sentosa promises to be a real festival of golf in a special year for the championship, which has been a springboard for players such as two-time champion Hideki Matsuyama of Japan (2010 and 2011), China’s Guan Tianlang (2012 winner who went on to become the youngest ever to make the cut at the Masters) and the promising Australian Curtis Luck (2016). 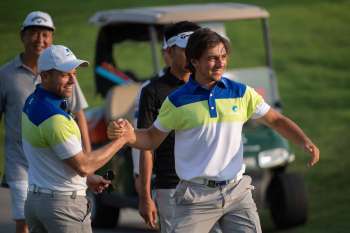