Aussies Day and Scott among five tied for Masters lead

Australians Jason Day and Adam Scott have starred in round two of The Masters where they sit tied for the lead at 7-under the card alongside a further three players.

On the course early, Jason Day tied Italy’s Francesco Molinari for the clubhouse lead before being joined at the top by Brooks Koepka and Louis Oosthuizen later in the round.

An eagle at the 15th briefly put Scott into the outright lead of The Masters however a bogey on the following hole saw him join the logjam in first place where he leads at the conclusion of a mid-tournament Masters round for the first time in his career.

Both Marc Leishman and Cameron Smith endured roller coaster days on course with inclement weather halting play mid-way through the second round.

Further rain following the weather delay saw temperatures drop dramatically but did little to dampen spirits on course with Tiger Woods putting on a stunning display of form to sit one shot behind the leaders.

Here is how each of our four players fared in round two...

How:  A consistent start of seven straight pars in round two was improved with a birdie at the par-5 8th, taking Scott to the turn with a flawless front-9. Back-to-back birdies at 12 and 13 moved him closer to the leaders before an eagle at the par-5 15th pushed the Queenslander straight into the outright lead. As rain started to fall at Augusta a near miss on the 16th resulted in a bogey, moving Scott back down to 7-under the card. Further near misses for birdie at 17 and 18 cemented his place alongside four others in a share of the lead.

What he said: “I struck it well today, better than yesterday. That front-9 is hard to get. I was hitting good shots but it’s hard to get it close. I hung in there and finally got a birdie at 8, and then played a nice solid back-9. I was very pleased I could stay patient because I was hitting it well and waited for the opportunities. It’s a bunched leaderboard and keeping pace was the main thing today. You never know, someone might separate over the weekend so I’m in a good spot to run with it.”

Jason Day – 5-under 67, 7-under 137 total – tied 1st
How: Jason Day almost seemed to be a new man as he stepped onto the first tee at Augusta National for round two of The Masters. After throwing his back out before the start of round one overnight treatment had Day moving better across the course, evident by a birdie at the 2nd to start the day. A further two birdies on the front-9 at 5 and 8 were followed by a bogey at 12, a blemish that was quickly forgotten as he moved to the next hole. Adding three birdies on 13, 14 and 16 across the back-9, taking his wife’s advice to ‘suck it up’ in round one proved beneficial as he arrived at the clubhouse tied for the lead.

What he said: “I was able to take advantage of the par-5’s out there and made a lot of birdies which was nice. It was a good day of golf with regards to the temperature and how hot it was but also how true the greens were. Being able to get myself into a good frame of mind going into it and also having the right momentum on my side was key.”

How: Starting round two on even par, consistency became key for Marc Leishman as few opportunities came knocking. A bogey on the par-5 2nd was quickly followed by a birdie on the par-3 4th to see out the front-9 at even par. Par-3’s, however, continued to be kind to Leishman where he posted yet another birdie at the 12th. Sitting under the card for the first time in round two, a bogey at the 18th once again saw Leishman all squared up on the scoreboard at the conclusion of the round.

How: Replicating his start to round one, Cameron Smith opened his second round at the 2019 Masters with a bogey on the 1st before quickly redeeming himself with a birdie on the par-5 2nd. It was, however, a run of four bogeys on the 5th, 10th, 11th and 13th holes among a string of pars that moved Smith above the card after starting the day at 2-under. Improving across the final five holes, Smith made the most of rain and cooler conditions to make birdies on the par-5 15th and par-4 17th, completing is round in 74 to be even par for the tournament.

All four Australians will progress to the weekend with the top 50 and ties and those players within 10 strokes of the lead qualifying for the final two rounds. 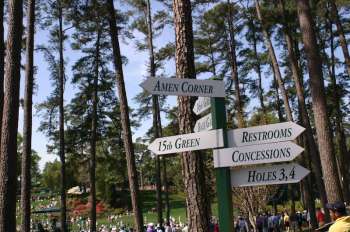