Tournament leader since his course record 10-under 61 in Friday’s second round, Bautista’s final round of two-under 69 saw him equal the tournament 72-hole scoring record of 20-under par set by Brett Rankin in 2019 but establish a new benchmark in tournament dominance in the NT.

Six clear at the start of the final round, the 25-year-old pushed out to an eight-stroke lead courtesy of two opening birdies but back-to-back bogeys at holes three and four and a surging Ben Wharton reduced the margin to four early in the back nine.

But that is as close as the chasing pack would get, Bautista’s salami-fuelled birdie at 15 and further birdies at 16 and 17 closing out a commanding maiden win on the ISPS HANDA PGA Tour of Australasia.

Boasting three top-three finishes already this season, the $27,000 winner’s cheque pushes Bautista inside the top-10 on the final Order of Merit which will open doors to qualifying schools on major world tours later in the year.

But first was collecting golf’s most unique trophy.
“This is my first major win so I’m ecstatic to have this one and I’ll remember that croc forever,” Bautista said.

“When I saw that putt go in on 15 the doors opened up and then I made another and then another.

“Just really happy to get the win and looking forward to the future and getting a bunch more.”

Spending nights during the week watching episodes of The Office with housemates Jeremy Fuchs and Linus Yip, Bautista conceded that defending a lead was a challenging mindset to be in.

When he made birdie in impressive fashion at the opening two holes – burning the edge with his eagle putt at the par-5 second – he looked set to blow away the field in the blustery conditions.

But he and defending champion Aaron Pike both struggled on the front nine and it took until he made birdie at the par-4 15th to put the tournament result beyond doubt.

“I’m ecstatic. Today was definitely the harder round of the last three, just because I didn’t make any putts for what felt like 13 holes. When I made one on 15 that one felt really good,” he said.

“I know I could get it done. I’ve played really good golf this year, I’ve just played my own game and been really consistent.

“I have a lot of exciting months and years ahead where I want to get some more wins.”

Third in this event six years ago, Hart’s closing four-under 67 was bettered on Sunday by only two players as he and Wharton finished level at 13-under par.

A prolific winner of pro-am tournaments but still chasing his first 72-hole title, Hart hopes that his final round of five birdies and one bogey is a sign of better things to come next season.

"To shoot a score on a Sunday with only one bogey, even with the way I hit it, and to know I can scramble that well, it's very, very good for me personally and mentally as well, to know I can do it and hold up under the pressure,” said Hart.

"When you're that many shots back you can go at a lot more, hit a lot more drivers and try and be aggressive. I gave myself some looks for birdies but I just didn't capitalise on the back nine.”

Playing in the final group, Wharton was the player who threw the mantle down to Bautista early.

He matched Bautista’s birdies at the first two holes and then rolled in a putt from 25 feet for birdie at the par-3 seventh.

From that point on however it was nothing but pars as Bautista steadied and kicked clear.

"It was kind of a good thing having him so far out in front and having something to chase,” said Wharton.

"Getting off to a hot start was good and I got a bit defensive on the way round and the putter went a bit cold.

"I'm happy with the way I played. I hit a lot of shots where I wanted to hit them but Austin played amazing.”

Defending champion Aaron Pike (71) began the final round as Bautista’s nearest challenger but a run of three straight bogeys from the sixth hole effectively cruelled his chances of a repeat win.

With significant Order of Merit implications he played the back nine in two-under, including a crucial birdie putt at the final hole that saw him snare outright fourth and elevated him to fifth on the Order of Merit, earning an exemption into Korn Ferry Tour qualifying school at the end of the year.

The battle for the third and final DP World Tour card also went down to the wire, Andrew Dodt holding on to third spot, shooting one-over 72 on Sunday to finish two shots ahead of Dimi Papadatos. 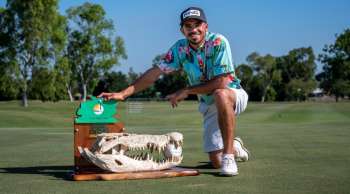