Blake Windred produced the best round of his life on Thursday and the lowest opening day score to par the Asia-Pacific Amateur Championship has ever seen.

The 21-year-old from Newcastle went berserk at Sheshan International, crafting a bogey-free 9-under-63 that has him two clear of the field through 18 holes.

“That's actually the lowest round I've ever shot,” Windred said. “I’ll remember that for a long time.

“I just felt like I could go at any flag...I talk about it with my coaches a lot just being limitless and there's no limit on how many birdies you can make.

“You can probably birdie every hole I suppose out there.  Yeah, nine's good.

“I didn't even realise I birdied the last four until I signed the scorecard. I was just enjoying it so much and I’m just shattered it's ended.”

Four birdies in his first seven were followed by another at the 10th, before the World No.11 thundered back to the clubhouse with birdies on each of the last four holes.

“The first nine, I kind of struggled getting the pace,” Windred said.

“I just felt like I could have rolled in a few more. I'm so happy I stayed patient and didn't start to force it because I knew I had the lines. I was hitting fairways.

“In the back of my mind, I really did think there was maybe a six or a seven. I didn't really think a nine.”

After making the turn, Windred holed a slippery three-metre putt down the hill at 10 to climb to five-under.

At that stage he was trying to reel in Junhong Park, but as the day grew longer, the Korean had zero chance of keeping pace with Windred.

A two-metre putt for birdie dropped on 15 before an even longer try curled home for a seventh birdie of the day at the very next hole.

Windred stumped his tee shot pin-high on the par-3 17th to a metre and converted for three in a row.

Despite being forced to lay up from the rough at the par-5 18th, Windred left himself just over two metres for birdie no.9 on the final hole and he rammed it home, capping off an extraordinary opening day in what could be his last amateur tournament.

His new life as a professional awaits if he doesn’t life the silverware on Sunday.

But if he can build on his opening round lead and win, nothing will stop Windred from staying amateur and playing in the 2020 Masters and The 149th Open.

“This week was the main priority and it's been like that for the last year, basically,” Windred said.

“I’ve kind of marked this in the diary and said that this is the major.

“There's no sugarcoating it – I need to win and that's it. There's no other option.” 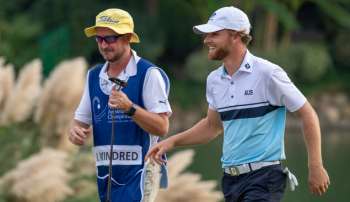