Having previously considered Tom Doak as the designer for a private golf course in Florida, NBA Legend Michael Jordan has now selected Bobby Weed Golf Design to spearhead his high-end exclusive club in Hobe Sound, to be known as GROVE XXIII.

Jordan is the majority partner in GROVE XXIII, and has appointed Bobby Weed to design him an 18-hole golf course ready for play sometime next year. Construction is expected to begin shortly, with Weed planning to live on site throughout the building of the course to personally shape greens, tees and bunkers and supervise the entire construction process.

According to a press release issued by Bobby Weed Golf Design, GROVE XXII will be built on a former citrus grove, and “routed with the south Florida trade winds in mind. The two nines wrap around each other while traversing the site in opposing directions. This dynamic layout ensures that golfers will feel the breeze from every quarter.”

“The routing also features a unique crossover at the 5th and 14th tees, where golfers can switch from one nine to the other and still finish out a nine-hole loop. This singular feature offers the membership four nine-hole permutations, significantly enhancing both daily set-up and member tournament format possibilities.”

“Gentle contours will distinguish the site, while a continuous sward of turf will flow from tee to green, allowing golfers to traverse the property naturally from one hole to the next. Copious tight-cut grass will surround the low-profile greens, providing players with a multitude of short game options. A palette of native rough grasses, scrub/shrub plantings and the occasional specimen oak will provide a distinctive texture to the landscape.”

Weed describes the design process, and creating “a course for tomorrow, with a refined edge.” He added, “knowing the caliber of the membership and Michael’s passion for golf, we are designing a forward-thinking, progressive layout.”

Aside from a members-only 18 hole course, GROVE XXIII will also feature an intimate, contemporary clubhouse with elevated views across the course.

Bobby Weed is known for his long association with the PGA Tour, and a lengthy apprenticeship with Pete Dye that included working on the Medalist course nearby. He has collaborated with many famous golfers on design, including Arnold Palmer, Jack Nicklaus, Ray Floyd and Jerry Pate. Perhaps his best regarded solo design was the similarly exclusive Olde Farm course in Virginia, which likely provides an excellent benchmark against which the GROVE XXIII course will be measured. 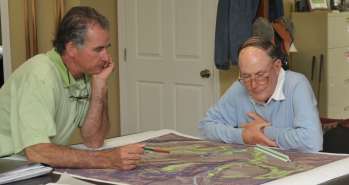