Brad Kennedy has become a two-time New Zealand Open champion after winning the 101st edition of the tournament at Millbrook Resort.

Kennedy capitalised on perfect scoring conditions and an ability to go low on Sunday to post a bogey-free round of 8-under and take a two-shot victory over Victorian Lucas Herbert.

With twin results of T3 over the past two weeks and the heartbreak of a final round fall at the Queensland PGA Championship still haunting his conscience, Kennedy was determined to set the standard early when he began the final round from two shots back.

“It felt like I’d lost two events and then to come back and play how I did this week, I think it’s going to take a little bit of time to really understand why the things happened for the reasons why they did and you just never know in this game.

“I think I was chasing today which put me in a really good mindset to continue to attack and I felt like a couple of times in the last few weeks I’d started to play out of what I can do and what I trust where today I really just focussed on doing what I needed to do.”

While overnight co-leader Joohyung Kim faltered early and Herbert soared into the lead Kennedy sailed under the radar with birdies at the second, fifth and sixth holes.

A double-bogey from Herbert at 13, and a subsequent run of three birdies from Kennedy from holes 12 to 14 was all it took the 45-year-old to rocket out to a three-stroke lead. Yet it wasn’t until he arrived at the 18th hole that he was aware of the position.

“The course played unbelievable over the weekend, and not much breeze, I thought someone could easily shoot a really low one,” he said.

“Under pressure that’s hard, to get out there in the second last group and shoot that score under those conditions. I wasn’t aware of the scoring, because in the past that’s been a negative for me, just to look up and have those emotions affect you, whether you are in front or behind.

“I really made a conscious effort today of head down, wait until it’s finished and then react.”

Nerves filled the scorers hut on 18 as Herbert got within one stroke of the 21-under total set by Kennedy on his approach to the last but yet another wayward tee shot from the Victorian meant the Brodie Breeze Cup would again belong to Kennedy.

“I saw that Lucas got to 20 and then I putted out and I thought, well if he makes a birdie we are in a playoff, so I was never done until they said he hit it in the water,” he said.

This becomes Kennedy’s 13th professional victory, his fifth on the ISPS HANDA PGA Tour of Australasia and his maiden Asian Tour win. He also becomes the first player to win the New Zealand Open twice since Greg Turner in 1997, and the first Australian to win twice since Bob Shearer in 1981.

“It’s pretty special. I don’t know if I’ll win a second one again, to be honest,” he said. “I was looking to hang the boots up at the end of this year, I’ve been doing it for 25 years and just really wanted to make this year a really positive year to end.”

“I’ve sacrificed a lot, but also my family has sacrificed a lot too. I’ve been pretty selfish over the last 15, 20 years playing the game and it just feels now is a good time to get back and watch my girls grow up and spend some time at home.”

The three-time Japan Golf Tour winner will now have the opportunity to return to the Asian Tour schedule next week in Malaysia if he chooses, however, the prospect of time spent at home on the Gold Coast with his wife and two daughters will play a part in the future of Kennedy’s career.

A busy schedule in the early part of 2020 caught up to Lucas Herbert in a hard-fought final round of the New Zealand Open with the 24-year-old admitting his best golf was not on display in Queenstown.

“It’s just a good start to the season. Obviously I had the win in Dubai and then to back it up with another top-five finish was really pleasing and realistically I didn’t have my best stuff this week,” Herbert said.

“To finish second you’ve got to look at the positives and I sort of can’t slouch too much at that.

“It probably looked like I hit it great but I was really battling some stuff with my golf swing and obviously two bad swings at the wrong times and a double on 13 and a bogey on 18 and that’s kind of the tournament right there.

“It was just one of those days where I just needed more stuff to go for me and it just didn’t so you’ve got to take those with the good and if I put myself in that position again hopefully it works out next time.”

Just months after a T3 finish at the Australian PGA Championship Nick Flanagan has again finished third at an ISPS HANDA PGA Tour of Australasia tournament but despite battling nerves throughout the final round the Novocastrian will take a number of positives home with him to Texas.

Asian Tour prodigy Joohyung Kim salvaged a final round of 70 following early errors to finish in fourth place ahead of New Zealand duo Harry Bateman and Michael Hendry in fifth place at 15-under.

The ISPS HANDA PGA Tour of Australasia now breaks until May for the PNG Open. 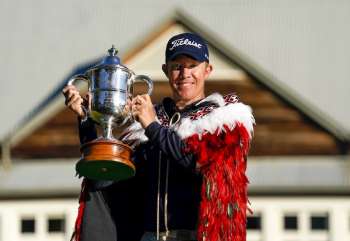