Earlier this year it was announced that the Cabot Group, the development company co-founded by Canadian Ben Cowan-Dewar and American developer Mike Keiser and responsible for the popular Cabot Links / Cabot Cliffs courses in Nova Scotia, had purchased the sprawling Florida resort known as World Woods. World Woods was established in the 1990s by a Japanese company and features two full-length golf courses and a par 3 layout designed by Tom Fazio. Cabot plans to rebrand World Woods as Cabot Citrus Farms.

It was assumed at the time of the acquisition that each of the courses at World Woods would be refreshed or reimagined by the Cabot team, which was confirmed this week alongside a series of design appointments. According to the Cabot website, partners Keith Rhebb & Riley Johns have been appointed to renovate the Rolling Oaks course, while Kyle Franz will renovate the more celebrated Pine Barrens layout. Each of Franz, Rhebb and Johns are familiar with the Cabot brand, having each worked at either Cabot Links or Cabot Cliffs in Canada. Keith Rhebb is also lead shaper on the under construction Cabot Saint Lucia project.

Mike Nuzzo was also appointed to redesign the property’s par 3 course and practice facilities. Nuzzo will plan the design of an additional short course at Cabot Citrus Farms. Nuzzo was the designer of the somewhat mysterious Wolf Point course in Texas, which receives very little play but has a strong and passionate fan base.

World Woods is the first established golf property that the Cabot team has purchased, but on almost every level the acquisition makes perfect sense. The golf is good but underperforms in many ways, yet it occupies precisely the sort of sandy, rolling ground that Keiser, in particular, is famous for seeking. The following description taken from Cabot Citrus Farm website highlights the appeal.

Although less familiar with Kyle Franz’s work that the other appointed designers, we have no doubt that the redevelopment of World Woods will be a tremendous success and compliment the Streamsong Resort in nearby Polk County to provide Florida golfers with a second world-class public-access destination.

A Golf Digest report this week included comments from the appointed designers on their courses, and a teaser for what visitors might expect when the facility reopens in 2023. Franz is looking to legendary architect George Thomas’s concept of a “course within a course” for inspiration, and says that he will inject variety into Pine Barrens through the use of flexible tee grounds and holes that can play to different pars from one day to the next.

Franz told Golf Digest, “By creating alternate fairways and shifting tees around, people will get a little bit different look at the course every day. The analogy I made to the crew was that this could be almost like Pine Valley, with Pinehurst No. 2 greens and LACC’s flexibility.” His aim is for it to feel like a completely new golf course.

Rhebb and Johns have worked closely with Bill Coore over the years, and told the magazine that their design was going to evolve in the field in much the same way as Coore’s famous courses do. Rhebb told Golf Digest, “We’ll be working closely with the superintendent to make the turf a highlight of the design and to emphasize the ground game. We want the ball to be able to react off the variety of contours and feeding slopes.”

“We’re walking into this open-minded because we know working in the sand gives us the freedom to be creative and to build something special,” Rhebb added, “and it’s going to take some time to figure out the best way to unlock the full potential of that property.”

For a creative designer like Mike Nuzzo, the opportunity to create two short courses and a comprehsnive practice facility across 110 acres of sandy ground must be a dream assignment. He told Golf Digest, that while one of his short courses would be exclusively made up of par three holes, the other would feature six drivable par fours, a reachable par five and two par threes.

In Nuzzo’s own words, “We don’t have any traditional constraints—we don’t have to hit a yardage or a number on a scorecard, so we’re going to go all-out on fun, creative, play-all-day golf holes. There’s nothing holding us back.”

Nuzzo added that because the site is all sand, “I’m just like a kid in a playground. The idea is just to blend everything together so it’s almost, as much as we can make it, continuous turf from the first tee to the last green with lots of bumps.”

According to the Cabot Group, each of the golf courses will close this June for re-construction, with a grand opening likely for winter 2023. 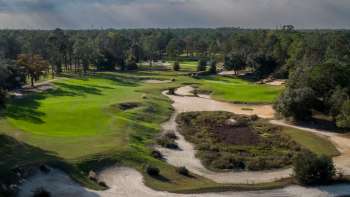