March 18, 2015 – The spectacular new Cape Wickham Links in Australia has opened for a sneak preview. From earlier this month, a series of preview groups have been sampling this exciting new golf course on the northwestern coast of Tasmania’s King Island.

As the fairways and greens at Cape Wickham have been maturing, work on a temporary clubhouse overlooking the 1st tee and 18th fairway has concluded. Plans are now afoot for a 20-room accommodation pod, located near the clubhouse and with breathtaking views north toward Bass Strait.

Among the early visitors have been eager golfers from New Zealand, the USA, Europe and most mainland states of Australia. Feedback has naturally focused mostly on the stunning scenery, but a recent Top 100 Golf Course Rater from the USA summed up the experience as:

“Cape Wickham is definitely special. I don't think I have seen anything remotely like it. I commented to one of my buddies that it was like Cypress Point and Ballyneal had a baby. A prodigy baby! It is a course that will deliver in all my key wants; strategy off the tee, challenging approach shots, ground game in spades, fun factor and a jaw-dropping walk in the park. Not many courses deliver on all those points.”     Daryl David, GolfWeek Top 100 Rater.

Another recent international visitor was renowned photographer Larry Lambrecht, the first professional photographer to take shots at Cape Wickham. A sample of Lambrecht’s images are attached to this media release, and more can be accessed via the Photo Gallery page at www.capewickham.com.au

Above - The par four 2nd hole at Cape Wickham

About the Golf Course:

Due to open officially on 30 October this year, Cape Wickham occupies an incredible seaside property in the shadows of Australia’s largest lighthouse. Measuring close to 160 feet in height, Cape Wickham is not only the tallest lighthouse in Australia and the tallest stone lighthouse in the southern hemisphere; it is now also the tallest on any golf course in the world. It was constructed from local quarried granite back in 1861, following a series of shipwrecks along King Island’s treacherous western coast.

Encompassing an area of approximately 120 hectares, Cape Wickham Links was designed by Mike DeVries and Darius Oliver and flows seamlessly across diverse terrain. Eight holes are adjacent to the ocean plus two additional green sites are pressed against the Bass Strait shoreline. Interestingly, the inland holes are equally dramatic and arguably blessed with the most appealing ground undulations on the property. They also enjoy beautiful views of the ocean, the lighthouse and a pair of offshore islands known as Christmas and New Year Islands.

An unconventional routing, the first 13 holes are set to the west and south of the clubhouse with the finishing 5 holes to the north and east. The opening loop tiptoes along a rocky headland known as Cape Farewell before turning into the larger southern dunes and then heading back along the western coast. The lighthouse and beautiful Victoria Cove beach dominate both the closing stretch as well as views from the clubhouse and lodging areas.

Preview rounds at Cape Wickham will continue until early April, with the course then closing over winter and reopening formally for the Melbourne Cup long weekend. Bookings commencing 30 October 2015 are now being accepted.

Further information and media images can be found at www.capewickham.com.au or viadarius@planetgolf.com.au

Cape Wickham Links has been developed by businessman Duncan Andrews, who was involved in creating Thirteenth Beach Golf Links at Barwon Heads and is the developer and owner of The Dunes Golf Links on Victoria’s Mornington Peninsula.

About the Design Team:

Cape Wickham Links was designed by Mike DeVries and Darius Oliver. Best known as the designer of The Kingsley Club and Greywalls golf courses in Michigan, DeVries was recently named golf’s most under-rated architect by The Golf Channel (USA). He describes the Cape Wickham site as ‘the best he’s seen, anywhere in the world.’

A local golf course design consultant, Oliver is the author and publisher of the Planet Golf series of books and the current Architecture Editor at Australian Golf Digest Magazine. His travels have taken him to the premier 1,000 plus golf courses on the planet.

King Island is located in Bass Strait, midway between Melbourne and the northwest coast of Tasmania. The island is best known for its world-class dairy products, fresh seafood and succulent grass fed beef. It’s also a surfer’s paradise, with perfect year-round conditions and one beach, at Martha Lavinia, ranked among the Top 10 surf breaks in the world. For golfers too, the existing King Island Golf & Bowling Club in Currie is regularly listed as Australia’s best 9-hole course.

Visitors to King Island can also explore the historic shipwreck trail, which takes in much of the western coastline. During the 1830s and 40s this stretch of coast was among the deadliest in the world. In 1835 the convict ship Neva sank near Cape Wickham, with more than 200 people, mostly women and children, drowning at sea. The sinking of the Cataraqui ten years later remains Australia’s worst civil maritime disaster and led to the construction of the Cape Wickham and Currie lighthouses.

Access onto King Island is by plane, from either Tullamarine or Moorabbin airports in Victoria, or from Launceston and Burnie airports in Tasmania.

Located on the northwestern coast of King Island, Cape Wickham is approximately 30-35 minutes north of the island's airport and main township (Currie). Although the 48-metre Cape Wickham lighthouse was constructed and operating in 1861, it wasn’t formally opened until 2011 when former Governor-General Quentin Bryce presided over an official function to commemorate its 150th anniversary.

Beyond golf and the lighthouse, the Cape Wickham area is also home to a sizeable colony of short-tailed Shearwaters (commonly known as mutton-birds). These migratory seabirds spend winters in the Arctic and return to King Island over summer to breed. The golf course has been constructed around nesting areas, with tens of thousands of burrows in the immediate 120-hectare golfing precinct. Much like the Fairy Penguins on Phillip Island, the Shearwaters at Wickham are a genuine attraction of the region and resort guests will be able to enjoy the nightly spectacle of thousands of seabirds returning to their burrows after dark. 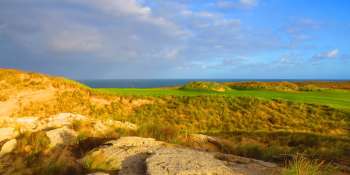