More than six years after the Tasmanian Planning Commission (TPC) refused to permit a golf and housing project on the Seven Mile Peninsula near Hobart Airport, comes exciting news that the development has reemerged as a golf-only concept. Trans-Pacific partners Mike Clayton and Mike DeVries will design the new course, on what appears to be an ideal stretch of sandy linksland.

Tasmanian professional golfer Mat Goggin is overseeing the development of the Seven Mile Beach golf course, having first discovered the land in his youth. He apparently selected the design team owing to a long personal friendship with Clayton. Clayton’s former partners Geoff Ogilvy and Michael Cocking were presumably considered as well, given they were involved in previous plans to create a larger golf resort on the property. That rejected proposal included a second golf course and as many as 216 home sites. The new plans are for a traditional, pure-golf facility, with 18 holes and a clubhouse on the narrow spit of Peninsula duneland.

Not only is the potential for great golf at Seven Mile Beach considerable, with the location being so close to Hobart Airport it does seem an obvious venue for any future professional event in the state. The course will apparently measure around 7,000 yards from the tips, and likely provide a stern test given its exposure to the elements.

In choosing the Clayton and DeVries team to handle the design at Seven Mile Beach, Goggin is clearly looking to replicate the success and quality of Tasmania’s earlier modern links. Clayton was famously an associate of Tom Doak when he designed the first course at Barnbougle Dunes, whilst DeVries designed several holes at Cape Wickham and spent the first three and a half months of construction living on King Island. He is expected to relocate to Hobart for the entire duration of the Seven Mile Beach construction phase.

In announcing the decision to appoint Clayton and DeVries to design his course, Goggin talked about his long standing relationship with his fellow Australian Pro and the genesis of the concept.

Said Goggin, “For years, I had been espousing the potential for golf at Seven Mile Beach to Mike Clayton. Before I approached the Tasmanian Government, I needed someone whose judgement I trusted to tell me bluntly if what I saw as incredible land was exactly that and not the hallucinations of an untrained eye.”

“I convinced Clayts to come to Hobart for a site visit. As we walked around on that day nearly ten years ago, using blunt language for which he is somewhat renowned, he swiftly concurred that the site is indeed as incredible as I suspected.”

While Clayton has a near ten-year association with Seven Mile Beach, DeVries first saw the property in early 2020, prior to the COVID-19 pandemic closing Australia’s international borders. He described the course routing as taking, “full advantage of the diversity of the site, from the high dune that serves as a ridge on the north side of the course down to the low-lying dunes at the beach. Holes will tumble across the bigger dunes, have quieter links terrain in the lowlands, and hug tight along the shore, all the while highlighting the vistas of the ocean and nearby Hobart.”

“The climate is ideal for the growth of fescue,” adds DeVries, “and that turf will provide for a running game and creative shots that are found with true links golf. The routing is continuous but has multiple junctions that give it intimacy while also providing for opportunities to play the course in a different sequence or as a shorter loop. The design will stretch to about 7,000 yards at a par of 72 and encounter all points of the compass, despite its predominant east-west orientation.”

While a construction timeline is not yet set in stone for Seven Mile Beach, and the project remains somewhat at the mercy of Australia’s border situation, the developers have already made progress on civil works. They recently extended the entrance track into the property, and are due to shortly begin weed and introduced species removal across the golf course site.

As with the rest of the Australian golf industry, we wish Goggin and his team well and shall be watching the development of this exciting project closely over coming years. 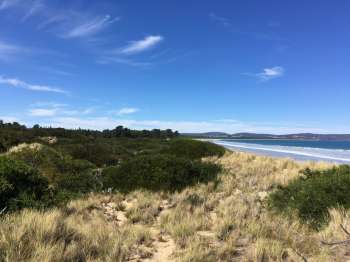