Clayton and Pont to study the bunkering at Royal Dublin.

The newly formed CDP Golf company has announced that it has been retained by The Royal Dublin Golf Club to undertake a detailed study of its course’s bunkers. This project will initially be undertaken by two of its partners, Infinite Variety Golf Design (Frank Pont) and Clayton Golf (Michael Clayton).

The club having been founded in 1885, its present links was first laid out in 1889 and then wholly redesigned by H.S. Colt in 1920. In addition to the course’s great architectural heritage, Royal Dublin is steeped in Irish golfing history. Its professional for over 50 years was “Himself”, Christy O’Connor Snr. Three Irish Opens have been hosted, won by Severiano Ballesteros (twice) and Bernhard Langer; the Irish Amateur Championship has been hosted 29 times over a period spanning more than 120 years, the winners across the ages having included Harold Hilton and Louis Oosthuizen.

A detailed study of the course’s bunkers will be undertaken with particular focus on their adherence to Colt’s original design, their contribution to the overall aesthetic and their positioning. Thereafter, a significant number of them will be renovated in order to return their style to one more in keeping with their heritage.

The intention is also to amend some holes’ bunkering in order to restore elements of Colt’s asymmetrical design which have been lost over time. Frank Pont, IVGD’s lead architect, says: “It is an immense privilege to have been asked to renovate this wonderful Colt course’s bunkering and a huge pleasure to be working with Mike Clayton in Ireland, the country where I spent part of my architectural apprenticeship twenty years ago. Having already examined the course in some detail, I am confident that we will deliver revisions that will be more pleasing on the eye yet challenging to better golfers whilst being a little more forgiving for higher handicappers.”

Mike Clayton, CG’s lead architect, says: “I remember Royal Dublin very well from my participation in the Irish Opens that took place there whilst I was a member of the European Tour. I am delighted that this project will be my first in Europe and could not think of a better place to start working with Frank Pont as part of our wider partnership with Mike DeVries.”

Edward Cartwright, Chairman of Clayton, DeVries & Pont, says: “Royal Dublin is the 27th Colt course to which Frank Pont has provided or currently provides architectural advice. Six of his current Colt clients are listed in Golf World’s most recent list of the top fifty courses in Continental Europe.

Mike Clayton’s knowledge of links golf spans the world. In addition to having played and studied many great links courses whilst on tour, he co-designed Barnbougle Dunes in Tasmania with Tom Doak, one of the world’s most highly respected links to have been built in the past 20 years. Clayton, DeVries & Pont was created to deliver such collaborations as this, giving clients access to an unparalleled breadth of architectural expertise and golfing knowledge.” 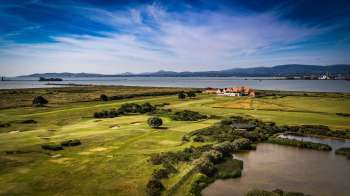 Ground breaker 'The Athena' locked in for three more years