Disappointing news for golf late last month, when it was reported that the Scottish National Government had refused planning permission for the previously approved Coul Links project in Embo, close to the legendary Royal Dornoch links.

Planning permission was required for the golf course, after the national government ‘called-in’ the project and effectively over-ruled the decision of Highland Councilors in June 2019 to approve the development. Unlike the controversial, and unpopular, Trump International project near Aberdeen, Coul Links was more along the Kingsbarns and Castle Stuart model, of a low set links along stunning coastal dunes and a single clubhouse building. We have no doubt the course would have been incredible, and equally that it would have encouraged visitors to spend longer in the Highlands area.

A controversial plan to build an 18-hole championship golf course in the Highlands has been refused planning permission by the Scottish government.

About 32 acres of the planned course was proposed for dunes at Coul Links at Embo, near Dornoch.

Highland councillors gave the project the go-ahead last June, before Scottish ministers called in the planning application for further scrutiny.

Following a public inquiry, the government has refused permission.

Ultimately, what derailed the project was strong opposition from environmental groups and a view, at Government level, that the socio-economic benefits of the development did not outweigh the possible impacts on the local environment.

Keiser told the Golf Digest that he was surprised by the outcome, given it was the government who had first encouraged his business partner Todd Warnock to build a great golf course in Scotland, and the fact that the Highlands council had already approved the project.

Said Keiser, “The old links courses like Balybunion and Dornoch couldn’t get approval today. The best sites are dunes and they have been characterized as extremely sensitive and environmentally untouchable. Given the EU statutes I don’t think any of the old greats would get approved.” Keiser added, that “the interesting thing is it was the government that said to Todd, ‘Why don’t you build a great golf course?’ The best site according to Bill (Coore), and we agreed, was Coul Links. It was the best site and the worst choice we could’ve made if we wanted to build any golf course.”

While lamenting the decision, Keiser told the magazine he is moving on and that other projects in more golf-friendly locales will keep he and his family busy in the years ahead.

Keiser had teamed with business entrepreneur Todd Warnock, landowner Edward Abel Smith, and the Embo Trust to build a seaside layout less than two miles north of Royal Dornoch. They submitted planning documents, two years in the making, in September 2017, and addressed United Kingdom restrictions pertaining to sensitive duneland and the concerns of environmentalists. This included altering the design of the course to reduce the impact on the Loch Fleet Site of Special Scientific Interest at Coul Links.

Local golf clubs — including Brora, Fortrose & Rosemarkie, Golspie, Royal Dornoch, Skibo, Wick, Bonar Bridge and Tain — expressed their support of the project. The owners of the Royal Golf Hotel, beside Royal Dornoch, went so far as to announce plans for a $1.3 million hotel extension as a result.

“I’m not going to fight it,” Keiser continued. “I’ve read the ruling. If they say, birds, bees and butterflies are important and the golf course will affect them. They’re looking at that part of the study that said that. Our statement was we wouldn’t affect them in a material way. I don’t think we’ve bridged that gap.”

He didn’t want to speak on behalf of Warnock, his partner, who may choose to appeal the ruling.

Sadly, the ramifications of Coul Links being stalled likely signals a death knell to two potential courses that Keiser was considering in Wales and Ireland.

“I’m going to pass on those and do projects where the people want you. They’ll have to find someone else willing to crank through the EU dunes restrictions in Ireland. I thought Coul Links had a better chance,” he said. “My advice to anyone doing golf courses is go where you are welcome. The EU is not a welcoming place.”

While Keiser may be moving on from Coul Links, it won’t slow down his future course output. The Sheep Ranch is scheduled to open in June at Bandon Dunes in Oregon, and Keiser said he would be traveling to Saint Lucia in the eastern Caribbean Sea on March 2 to visit with Coore-Crenshaw, who are building Cabot Links St. Lucia, a luxury golf resort and residential community. A third course, Sedge Valley, is under construction at Sand Valley in Wisconsin, which is being designed by Tom Doak.

“My son, Michael, is talking about a fourth course there,” Keiser said of the Wisconsin destination that already is home to Mammoth Dunes and Sand Valley. “We’ve got a few other exciting sites and two of them are in friendly countries, but it would be premature to say any more than that now.”

“We’ll end up fine but it’s golf’s loss,” Keiser added. “Bill and Ben had a fabulous routing. I’m picturing it now and like Dornoch it would’ve been a blast. By the time you’d have gotten to 18, you’d be saying let’s go around again.”

Golf’s loss indeed, Coore and Crenshaw are the premier designers of this modern era and I understand their routing for Coul Links was exceptional. It, most likely, had the potential to become the best modern course in the British Isles. 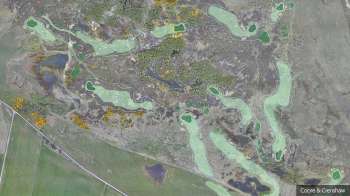