Major champions Ernie Els and Vijay Singh have apparently collaborated on a new golf course at The Els Club Desaru Coast in Malaysia, a short drive from the Singapore border. The Valley Course is the second 18-hole layout at The Els Club, and was officially opened for play on March 31, 2017. The earlier Ocean Course opened in 2016 and was designed by Ernie Els Design, the company also in charge of the Valley Course project.

According to the media release, Els and Singh are close friends and the collaboration was aimed at increasing tourism awareness and boosting the international profile of the Desaru Coast. The Valley Course lies adjacent the Ocean Course and is similarly of championship length and par of 72.

Said Vijay Singh of the golf course; “We wanted the Valley Course to be distinct, with its own true character that would provide golfers with a memorable challenge. We used the undulations to layer in a series of high impact bunkers that will mean golfers need to think carefully about how to best navigate each hole.”

Singh’s design partner Ernie Els added, “Opening the Valley Course is a major step forward in realising the vision of Desaru Coast, and to have The Els Club brand as the first in a long-line of major developments at this special destination is a real privilege. Ever since we embarked on this project, we have maintained our focus on the end product; one with excellence and distinction. All of this would not have been possible without the continued support from all our team and those from DDC.”

DDC is the Desaru Development Corporation Sdn. Bhd whose subsidiary Desaru Development Holdings developed and owns the golf club. Company CEO and Executive Director Muhammad Zainal Ashikin Muhammad Rejab commented that the launch of the second course “Completes the golf development in Desaru Coast; paving the way for the introduction of Malaysia’s most anticipated new tourism developments that will establish this corner of Johor Bahru as one of Asia’s most prominent destinations.”

Zainal added that his company expects to see a rise in Malaysia’s golf tourism with the opening of the Valley Course and looks forward to “welcoming golf aficionados from all around the world to experience a unique and rewarding golfing holiday here in Desaru Coast while inspiring others to embrace the sport.”

Planet Golf looks forward to reviewing the two golf courses at The Els Club Desaru Coast in the near future. 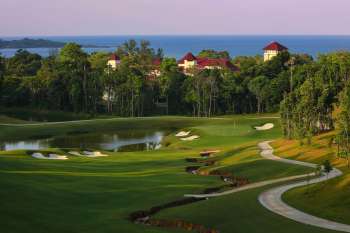 The 11th hole on the Valley Course at Desaru Coast