Ernie Els looking to put on a show in Fiji

Former World Number 1 and four-time major champion Ernie Els is looking forward to exploring the Pacific paradise of Fiji when he makes his debut at the Fiji International presented by Fiji Airways at Natadola Bay Championship Golf Course from 2-5 August.

Els will make it a family affair when he travels to Fiji for the first time to play in the tournament tri-sanctioned by the ISPS HANDA PGA Tour of Australasia, European Tour and Asian Tour.

“I’ve never been to Fiji so when I was contacted to see if I’d like to play I thought why not, it’s going to be late July and early August, should be nice and warm so I may as well check out Fiji,” said Els.

A consummate professional, Els will be doing his research on the Vijay Singh designed Natadola Bay Championship Golf Course before teeing it up at the picturesque venue.

He’s well aware of some of the challenges the 18-holes can present, in particular the gusting winds on the holes exposed to the Coral Sea.

“I’ll do some homework on the course in Fiji, Vijay has played there and Brandt Snedeker has played there, I did watch a little bit one year when the wind was blowing unbelievably,” added Els.

“Hopefully the wind stays away a little bit but I’ll find some information on it before I get there and go through the course.”

The South African has one of the most glittering resumes in professional golf and has recorded wins on both the European Tour (28) and PGA TOUR (19) throughout his career which has taken him across the world and to the upper echelons of the sport.

“I’ve been to quite a few spots in my playing career, I’ve played professionally since I was 20-years-old and I’m 48 now so it’s been quite a while.

“I’m not sure how many continents or countries I’ve been to, I haven’t quite taken count like my countryman Gary Player has, he could probably tell you exactly where he’s been.”

He’s now reached another milestone in the game and was named Captain of the International Team for next year’s Presidents Cup to be held at Royal Melbourne Golf Club from 9 – 15 December.

It has slightly changed how “The Big Easy” approaches tournaments he plays in with one eye now on the performances of potential International Team members.

“It’s a little bit different now, my capacity as a player has changed a little bit, I’m getting closer to 50 and I’m a Presidents Cup Captain so I’m really looking around at players,” Els said of his new a role.

Els and the International Team will have their work cut out for them to break the dominance Team USA has over the Presidents Cup.

“If you’ve watched the last couple of weeks especially on the U.S. Tour and last week at Wentworth, some of the International boys have really done well.”

The top-8 players (excluding those eligible for the European Ryder Cup team) from the Official World Golf Ranking at a nominated date will automatically qualify, leaving Els and his team to select four additional players to make up a squad of 12.

He won’t be short of players to pick from should the form of eligible players across the golfing world hold up in time for the December 2019.

“Satoshi Kodaira won at Hilton Head and then we’ve had some really good finishes by Marc Leishman, obviously Jason Day has been off the charts winning and it seems like he’s ready to win a major this year, Louis Oosthuizen is a top-5 player, Emiliano Grillo has played well.

“The core group of guys are starting to play well, we’re waiting for Hideki (Matsuyama) to come around and Adam Scott looks like he’s finding form. We’ve got eight players that have got to qualify then four picks, so I think I’m going to be in a healthy state come next year when we start making picks.

“We need to chip away at them, we’ve got four days next year to do that and the mission is to win 15 and a half points and we’ll be ready.” 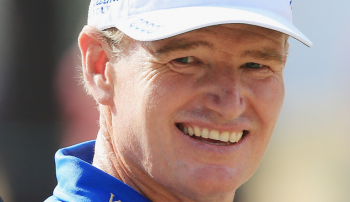 COVID-19 forces Queensland's hosting of the Australian PGA to be pushed back to Feb 2021.

Hulton Park to be converted into potential Ryder Cup venue