3 May 2018
Media Release:
Thirty-six-hole Lanhai International Country Club will reopen its Links Course this June following a sweeping, 12-month renovation directed by Melbourne, Australia-based Ogilvy, Clayton, Cocking & Mead (OCCM).
Founded in 2009 here on Chongming, an island in the Yangtze River delta, Lanhai International CC has quickly taken its place among the top clubs in Asia, on the strength of those 36 holes, its elegant Tuscan-style clubhouse, and a distinguished membership drawn from nearby Shanghai. The club’s profile and ambitions were raised considerably following its 2016 purchase by the Ping An Group, one of the world’s largest insurance conglomerates.
“We had two courses here, the Forest Course (a Nicklaus design) and the Links Course,” says Lanhai General Manager Jay Porter, formerly GM at Merion Golf Club. “The Links was by far the most popular among our membership, accounting for 65 percent of all rounds played. In that sense, I give the members and our new owners a lot of credit for renovating an already popular track, in the service of creating a truly world-class track. And make no mistake: That is the expectation.”
The weight of those expectations falls to OCCM, whose on-site activities here are directed by partner Ashley Mead.
“This was always a big-style course in terms of scale,” says Mead, who estimates the OCCM team (including Geoff Ogilvy, 2006 U.S. Open Champion) will have spent an extraordinary 150 days on site during the year-long construction term. “But we felt the original features didn’t do the terrain justice. Many of the greens and tees felt perched on the high points and not nestled into the dunes. So we’ve created 18 entirely new green sites that, in combination with bigger, more dramatic feature elements, give golfers the chance to play their way through the dunes, not across the top.”
Another big change: The renovated 18 will reopen as a walking-only course, a decision (rare in Asia) that necessitated the removal of some 8 km of concrete cart paths.
“There was another important factor that attracted our firm to this project,” Mead continues. “We felt the original golf course, despite the presence of several compelling links motifs (including some fairway contouring that was done very well), didn’t well represent the local environment. Many of the finer details that make any course unique felt imported or manufactured. We’re in China -- on an island in the middle of the mighty Yangtze River! Our redesign strongly accentuates that sense of place and culture.”
Though the firm recently broke ground on its first U.S. project (renovation of Shady Oaks GC, Ben Hogan’s club in Dallas, Texas), OCCM have worked mainly and to much acclaim in their native Australia. Their recent 36-hole redesign at Peninsula Kingswood has catapulted the club into Melbourne’s elite Sand Belt cohort. Down the road at Kingston Heath, the firm’s long-standing consultation gig recently produced a stunning new 19th hole. And though OCCM has authored more extensive, similarly celebrated renovations all over the country -- at Victoria GC, Commonwealth, Royal Canberra, The Lakes in Sydney, and Lake Karrinyup (home to a European Tour event near Perth) -- Mead sees very little at the new Lanhai design that he would call “Australian” or even “Australia-inspired”.
“We frankly see a lot of Friar’s Head at Lanhai,” Mead says, referring to the 2001 Coore/Crenshaw design, “and I think Long Island is a pretty fair comp for the natural sandy environment and vegetation here on Chongming. We drew a lot of inspiration on 11 at Lanhai from the 10th at Friar’s Head, where Bill Coore also used a natural dune short of the green. We just thought that was a wonderful natural feature to play around… More generally, in the way Lanhai transitions from fairway to sandy ground, then from wispy rough areas to outlying dunes, I see a great deal of Friar’s Head -- and Pinehurst No. 2, to be honest. I also see elements of Garden City, with its dark brown rough areas contrasting so strikingly with the green of the fairways.”
The team Ping An has assembled at Lanhai International is headed by the American Porter. Club operations are shared by U.S.-based Landscapes Unlimited and China's Forward Group, which also handled course construction duties on Chongming. The Forward/Landscapes partnership produced and continues to manage 9-year-old Shanqin Bay, now a fixture on every major world top 100 ranking. Indeed, the superintendent now presiding at Lanhai is Alan Hu, formerly the superintendent at Shanqin Bay, another Coore/Crenshaw design on another Chinese island (Hainan).
“We feel as though we have the finest possible construction and maintenance resources at our disposal here,” says Mead. “And that’s a good thing, because what we’re building here could not be handled by just anyone. The saving grace -- and the factor supplying this project such incredible potential -- is the terrain itself. The natural movement is compelling. The river is right there. And this entire golfing environment is undergirded by sand, straight from the Yangtze.”
Back to News 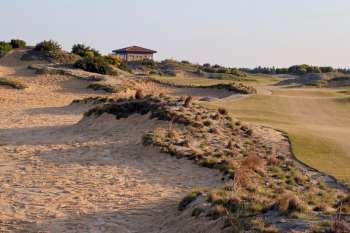