Following his departure from the USGA in 2021, former CEO Mike Davis has announced the first major project in a new career as a golf course designer. The project in question is an ambitious 54-hole mega development known as The Apogee Club, situated near Hobe Sound in Southeast Florida.

Mike Davis worked for the USGA for over 30 years, but left the organisation last year to form a new design partnership with Tom Fazio II. He has been living in the Jupiter area of Florida since leaving the USGA, and working on land acquisition, Masterplanning and approvals for The Apogee Club for several months.

Davis spoke to GolfWeek Magazine and confirmed the project.

“One of the courses is going to be designed by Gil Hanse, one designed by Kyle Phillips, and then Tommy Fazio and I are doing the third. But we’re overseeing the in-house construction, and I’ve been very involved with the permitting process.”

Hobe Sound is already a golfing hotbed, with Greg Norman’s Medallist Club situated within the exclusive enclave, along with Michael Jordan’s private Grove XXIII club. Tiger Woods has been a long-time resident of the area.

In announcing the project, Davis confirmed that the first course will be designed by Gil Hanse and start construction sometime this year. He and Fazio II will design the second course at The Apogee Club, with Kyle Phillips to create the third. They expect the Hanse course to be ready for play at the end of next year, with the subsequent courses to follow in late 2024 and late 2025.

The Apogee Club is being financed by Michael Pascucci, who developed Sebonack on Long Island, and Steve Ross, who owns the Miami Dolphins NFL team.

From the GolfWeek article:

“You couldn’t pull this off without people like Mike Pascucci and Steve Ross. You couldn’t do it,” Davis said. “What’s really cool about it is they’re doing it more as a legacy project. They don’t need to do this. But they just want to leave something behind that they and their families can look at and say, hey, this is something we created from scratch. It’s just fun to be around people that successful who aren’t resting on their laurels.”

Besides the financing, Pascucci and Ross are responsible for the name, Apogee Club.

“I’m not sure I’d heard the word before, but its meaning really is the pinnacle of something. They wanted something unique, and obviously the name is unique,” Davis said.

“Gil is going to do the first golf course that will start construction (this) month, and if everything goes according to time frame, we should have a golf course hopefully at least in part ready to play by the end of 2023,” Davis said. “Tommy and I will start the second golf course basically a year later, so it will open and be ready to play by the end of ’24. Kyle Phillips will do the third course, which will be open for the end of ’25. That’s what’s so neat about Steve Ross and Mike Pascucci is they want to see this thing done. They’re not doing one of these things where let’s see how many members we get before we build the next golf course. They’re saying, let’s do it and we’ll get members in due course, and if it takes a while, if we have a recession, so be it. We want to do this thing right.” 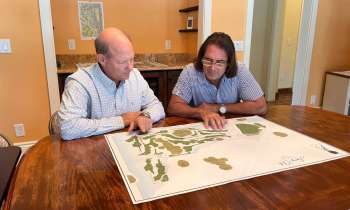