In what is undoubtedly a blow to Royal Sydney Golf Club’s redevelopment plans, late last month the planning panel at the Woollahra Council in Sydney’s leafy eastern suburbs refused permission for the removal of hundreds of established trees on the club’s championship golf course. Permission was sought to remove 595 mature trees on site (out of 2,696), to enable a comprehensive redevelopment to be undertaken by American golf course designer Gil Hanse.

According to the Daily Telegraph newspaper, the concerns of local residents regarding the scale of the tree removal played a part in the planning panel’s decision, along with likely impacts on biodiversity and increased ambient temperatures.

When the club exhibited their original plans in late 2019 council received 284 public submissions, only five of which supported the proposal.

The amended application of mid 2021 attracted 117 submissions, 38 of which were supportive, plus a 1227 signature petition against the plans.

Darling Point landscaper Sandy Pratten was among the passionate speakers to appear before the panel against the proposal from Royal Sydney Golf Club, which is a regular host of the Australian Open.

Ms Pratten, who is herself a golf club member, said many of her fellow golfers disagreed with the plans to remove the mature trees.

“The golf course is unquestionably the lungs of Woollahra municipality,” Ms Pratten said.

“The removal of these trees cannot be justified to renovate the golf course for an elite few.”

“Truly the removal of 595 trees has generated significant backlash both in and outside our community and with very good reason,” Ms Leopold said.

“Where exactly do they go? Some of these species are territorial and we will see a rapid increase in rescues, starvation and exposure.”

From a golf perspective, Woollahra Council’s Planning Panel made it clear that they support the preparation of a Masterplan for the Rose Bay site, as well as the reduction of total turf areas and overall water usage. Crucially, however, the panel was not convinced by the club’s argument that its golf course was in “desperate need of renewal”, or that an alternate design was not possible.

“based on the information before the Panel, it is not satisfied that the current proposal demonstrates that: the removal of the number of existing trees is justified or that an alternative golf course design could have avoided the extent of the proposed tree removal; the replacement trees will achieve no net canopy loss within 10 to 15 years, particularly as it is over reliant on short lived acacia species and there is an equivalent number of replacement large trees (over 20m) to achieve a like-for-like result and maintain the existing landscaped character and biodiversity outcomes.”

Over the past two decades, American golf has seen a trend toward massrive restoration and redevelopment projects, often with absurdly large budgets attached. The Royal Sydney Masterplan carried an apparent price tag of $17.4 million, which would likely be higher than the cost involved in creating a brand new golf course on that particular site. The plan required the course to be shut completely for an extended period of time.

It’s worth remembering here, that 15 years ago Royal Sydney undertook a major redesign with Ross Watson, which cost several million dollars and also involved months of disrupted golf for the membership. Though the Watson course jumped immediately back into the Top 10 on Australian golf course ranking lists, it has steadily fallen ever since and is currently listed at #52 in the country.

Rankings clearly aren’t everything, but for such an esteemed club the reputational decline of Royal Sydney’s prized golfing jewel has clearly been cause for concern. Although we have no doubt that the Hanse plan would have improved the golf course, when it comes to rankings it seems unrealistic to expect it to have performed much better than Watson’s did when first revealed, given the quality of Australia’s top courses and the site constraints that exist at Rose Bay. In many ways, the best the club could have hoped for was more sustained acclaim and, ideally, some sort of design finality. It must be a constant frustration for members, that the holes at Royal Sydney have continually changed over the last several decades.

Whenever golf clubs undertake expensive or ambitious redesign projects, it’s important that they are aware of their limitations and striving for realistic outcomes. Australian golf rankings have become so competitive in recent times, that the ceiling for a sandy suburban course like Royal Sydney is probably around the 8–15 bracket. That’s assuming the comprehensive redevelopment is excellent, and that new courses don’t bump it down the list. Given the comments of the Council’s planning panel, it’s interesting to now consider whether redesign makes more sense for the Royal Sydney Golf Club, rather than large-scale redevelopment.

In crude terms, if Royal Sydney is currently a 5 or 6 out of 10, its potential on the existing footprint might be a 7.5 or 8 out of 10. Most of the holes have design shortfalls but clear room for strategic improvement. We haven’t studied the Hanse redevelopment plan closely enough to comment with complete authority, but doubt its natural ceiling would be much higher than an 8, or perhaps an 8.5 out of 10. The club may need to ask itself whether such minor gains are really worth the extra cost and hassle.

Until recently, the idea of shutting down a course and completely rebuilding it were foreign in this country. Redesign programs were generally more modest, and golf clubs a little more comfortable in their own skin. Certainly, if Royal Sydney view its peer clubs and benchmarks as the Peninsula Kingswood redevelopment, or a place like Augusta National, then they may indeed need to close the course and spend $17 million on a transformative project to compete. If, however, the aim is for members to own the second best golf course in Sydney, then such expenditure, and such major member inconvenience, may not be necessary.

In our view, if Gil Hanse were able to undertake a methodical, hole-by-hole redesign of the existing golf layout at Royal Sydney, the finished product would have the potential to surpass every golf course in the city, except for NSW at La Perouse.

It will be fascinating to see if Royal Sydney does indeed change tack, or whether they appeal to the NSW Land and Environment Court to approve their tree removal plans. It will also be interesting to see if they are able to retain Gil Hanse as part of their redesign team, given how in-demand he has become in recent years. Sticking to the existing golf layout may not seem the ideal outcome for those in charge at Royal Sydney, but there are some good golf corridors on that course and a serious design overhaul could still produce a terrific result. Whichever path they chose, the club’s next steps will be crucial. 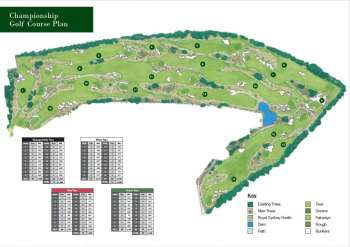