Having been closed for almost a year, the popular Fremantle Public golf course is set to reopen and showcase its new 9-hole, par 34 layout. Redesigned and rebuilt following the expansion of a neighbouring road, the Fremantle course features three completely new holes, including a par five for the first time, as well as all-new tee boxes, green sites and bunkers. The upgrade works also included a new irrigation system, cart paths, practice putting green and course furniture.

Richard Chamberlain is a consultant at the neighbouring Royal Fremantle Golf Club, who will maintain and manage the public course for at least the next 12 months. A new clubhouse and community centre is expected to be finished and operational later this year.

In announcing the reopening of the golf course, Fremantle Mayor Hannah Fitzhardinge was quoted in local media as being pleased with the redevelopment saying, “The designers have done a great job to retain a par 34 layout on a reduced footprint, and with the new tees, greens and bunkers, the course is looking great.”

Mayor Fitzhardinge added, that “the temporary facilities are still pretty basic at the moment, but they’ll be added to in the coming weeks.

“And while there’s still work to be done to build the new clubhouse and community centre, we’re happy to have the course open and to get people back and playing again.

“We thank everyone for their patience, and look forward to welcoming back all the regular club players who previously called Freo Public home, plus the casual golfers looking to squeeze in a quick nine on a fun and challenging course.”

Pleasingly, green fees at the Fremantle Public Golf Course are set to remain the same as pre-redevelopment and golfers will be able to use the course and its practice facilities from 6am to 6pm 7 days a week. 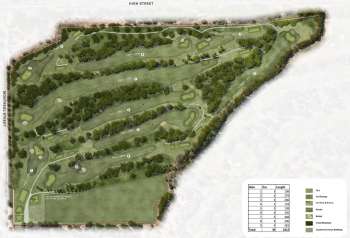