Late last year, American golf course designer Gil Hanse presented the Royal Sydney Golf Club with his plans for the redesign of their golf course. Sure to generate much heated debate, the plan involves a radical rearrangement of the existing holes with few remaining in their current form. Most interestingly, the 18th is converted from a dogleg par four to a long, straightaway par three played to the west and into a green site that remains beneath the club’s imposing clubhouse.

Other key changes include the loss of the short 3rd, the breaking up of the existing par five 7th into two drivable par fours, and the current 8th and 9th holes merging into one long par five. While the majority of the course is still arranged north-south in three hole up-and-back stretches, the east-west sections look vastly different and appear certain to offer more variety and strategy to both members and tournament participants. The current opening hole, on paper anyway, is a marked improvement, its flexible pin positions able to offer genuine rewards for those able to place their tee ball nearest to, or beyond, the fairway bunker complex. The slightly right, slightly left short par four combination of the 6th and 7th also looks good, and will be a fun part of the course to play.

Without doubt, however, the biggest talking point is the change to the famous par four 18th, aimed at converting an iconic, but compromised, hole into a strong, classic par three finisher. By allowing length, wind and elevation to provide the challenge here, Hanse can focus on crafting an attractive green site appropriate for the setting, rather than one that needs to both accept the long approach of the amateur and test the short-iron hitting professionals. Long par threes have long been under-appreciated in Australia, and should the members support the changes this one promises to be terrific.

The Royal Sydney redesign is part of a long-term strategic masterplan for the club, and will require the approval of the members prior to any works being undertaken on the site. We understand there is opposition to the plan from some within the club, and also disquiet that the redesign works will shut down the golf course for up to 24 months. According to club sources, the earliest starting date for the redesign program is 2019. 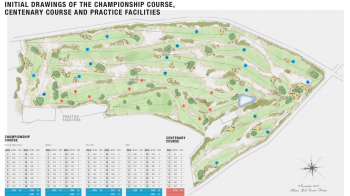