There was a major design announcement in America last week, with news that Gil Hanse and his Hanse Golf Course Design company had been engaged to rebuild and restore the famous Yale University Golf Course in Connecticut.

Yale has a cult following in the USA, having been designed by Charles Blair MacDonald and Seth Raynor on a difficult, 700-acre woodland dominated by rock, swamp and a series of steep hills. The Raynor MacDonald course opened in 1926, and at the time was one of the most expensive courses to build anywhere in the world.

Yale is still regarded today as the premier University course in America. It is known for its adventurous template design and series of memorable holes, including the legendary Biarritz par three 9th, which crosses a natural pond and plays into a massive green split by a five-foot guilty through its middle.

As good as the standout holes are at Yale, there is no doubt the course has deteriorated over a number of decades. Course conditioning has suffered as golf carts have become more prevalent, while tree encroachment and the loss of width and some original design features have started to take the gloss off what was an apparently incredible experience when first built. With these more recent struggles in mind, the decision taken by Yale University to undertake a large restoration project came as no surprise.

Nor was the appointment of Gil Hanse to lead the project a shock, given he has a growing and fine reputation for such work. Hanse has been involved in large-scale restoration projects for esteemed clubs like Baltusrol, Oakland Hills, Merion and Winged Foot but was quoted in a press release as describing the Yale appointment as, “the most significant restoration opportunity we have been entrusted with. The tremendous history of the design, the original significance of the course, and the potential that exists within its landscape are truly staggering.” Hanse added that, “our hope is that when we are finished, we will paint the landscape in the same tones and dimensions that Charles Blair Macdonald and Seth Raynor created.”

From an overseas perspective, perhaps the most surprising element of the Yale restoration story is the apparent USD $25 million price tag. It’s been reported, that USD $15 million will be spent on the restoration and another $10 million has been set aside to cover maintenance for a number of years moving forward.

Most golf related numbers are larger in America than elsewhere, but the figures quoted do seem extremely high for a restoration, even with presumably new irrigation, new turf, paths and a SubAir system under all 18 greens. Perhaps the AUD $17 million set aside for the Gil Hanse redesign of Royal Sydney is not as expensive as at first glance.

We look forward to returning to Yale sometime in the future to inspect the work.

From the Yale University Press Release.

"From the moment I stepped on campus three years ago, our Yale leadership and alumni from all over the world made it abundantly clear how important the Yale Golf Course is to not only Yale University, our teams, and the surrounding community, but to the game of golf. With our leadership team of General Manager Peter Palacios and superintendent Jeff Austin working closely with Gil Hanse, I am confident we will be able to give a golfing experience as exceptional as the university that bears its name." said Victoria M. "Vicky" Chun, Thomas A. Beckett Director of Athletics.

"The restoration of Yale Golf Course is the most significant restoration opportunity we have been entrusted with. The tremendous history of the design, the original significance of the course, and the potential that exists within its landscape are truly staggering. In restoring the scale of the design and the property, we have the opportunity to reacquaint the golf world with one of the landmark courses in the history of American golf course architecture," said Hanse. "Our hope is that when we are finished, we will paint the landscape in the same tones and dimensions that Charles Blair Macdonald and Seth Raynor created. It is a great honor to have been selected to work on this course, and we are excited to do our homework to make it as authentic as possible."

At the Yale Golf Course's inception, the canvas spanned over 700 acres, immersed with massive boulders, ledges of rock, swamps throughout and heavily wooded areas. The final creation was seen, in construction and character, as one of the finest golf courses in the world, created by Macdonald and Raynor.

Over time the Yale Golf Course has seen many changes to its original design. However, it has always maintained a solid foundation that continues to provide enthusiasm and excitement for regulars and newcomers alike.

The master plan includes significant investment into the maintenance of the course and the development of a fiscally sound business model. The increased capital into the maintenance endowments and the move to a daily-fee model provide the necessary support to keep Yale the No. 1-ranked college golf course in the country and elevate its standing as one of the best courses in the nation.

Yale Athletics is proud and excited to share plans with Yale alumni and the local community as it continues its mission of providing an exceptional golf experience for many years to come. 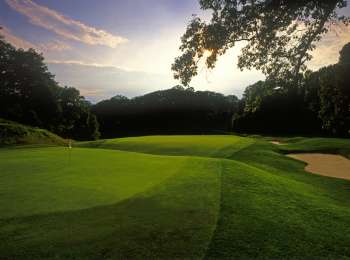