According to an article on the Otago Daily Times website, a proposed residential golf development in Cromwell is on hold while the Central Otago District Council consider a 900-section subdivision on land adjacent the new development site.

Owners of the Highlands Motorsport Park last year announced plans to extend their development into a neighbouring parcel of land, and add an 18-hole golf course and 100-section property development of their own. The golf course has been routed by New Zealand golf course designer Brett Thomson and professional golfer Phil Tataurangi.

While the motor park has been in operation since 2013, its neighbours have requested the council approve a ‘high density’ residential subdivision on 49 hectares that abut the racetrack. According to a Highlands representative quoted in the article, the park’s acoustic engineers found that "a good portion of that (new) community is going to be annoyed by Highlands on a daily basis…We need to understand what our future looks like before we move forward."

From the Otago Daily Times article:

A proposed multimillion-dollar world-class golf resort has taken a hit, at least until submissions have been heard about a planned 900-section subdivision in Cromwell.

Highlands chief executive officer Josie Spillane said this week the company's plans for a landmark 18-hole golf course were on hold while it waited for the outcome of Plan Change 13.

They want to use the land to build houses, a retirement village, a school, cafes and shops - making it a "high density residential" area.

While it was not yet known what shape the masterplan would take, Plan Change 13 was not in Highlands' favour.

"We believe it's an entirely inappropriate use of the land," Mrs Spillane said.

The land proposed for use in Plan Change 13, along State Highway 6, neighbours the Highlands Motorsport Park, the Central Motors Speedway and orchards. 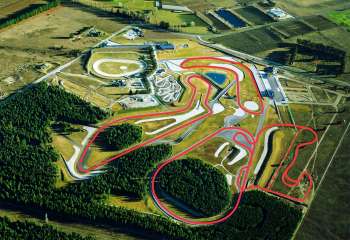