Richard Green surged, stumbled badly then gathered himself again to birdie the final hole and secure a dramatic three-phase victory in the Nova Employment Australian PGA Seniors Championship today, his fourth win of a remarkable year.

Having led by a whopping five shots as he walked on to the 13th green at Richmond Golf Club with yet another birdie putt, Green proceeded to give back his hard-earned advantage with three bogeys in the next hour.

By the time he cluttered his tee shot and his punch-out second shot into trees at the par-4 17th and made the third of those bogeys, he was tied for the lead with Andre Stolz and in serious trouble.

But the 51-year-old from Melbourne, who has won Seniors tournaments in Europe (twice) and in Thurgoona last weekend, proved himself to be made of stern stuff. He took iron off the tee at the par-4 18th, then wedged to two metres from the flag and rolled in the putt for birdie, launching into a fist pump that spoke of his relief.

“I think to win the way I have this year is unbelievable,” he said later. “When I was on the main tours they were coming every decade sort of thing, so to win four times this year is an incredible feeling. And for things to not go the way I wanted them to go on the back nine, and then to get it, that’s what let it (the emotion) out.”

Green shot a 4-under-par 66 to post 12-under overall and win by a shot from the dogged Queenslander Stolz, who had a putt from the fringe behind the 18th green to join him at 12-under and force a playoff. It sailed past the hole leaving the door open for Green’s birdie for the win.

Kiwi Michael Long (64 today) and Queenslander Chris Taylor (67), who was in the contest until his birdie putt at the 18th hole failed to drop, were tied for third at nine-under-par.

But the day was largely about Green, who played a scintillating front nine with four birdies to seize control of the tournament.

The fourth of those birdies came at the short par-3 eighth hole with a chip-in from the fringe, and coincided by a flubbed chip and a bogey from Stolz as his playing partner, which pushed the lead out to three shots.

Another nice birdie putt for Green at the 11th left him four ahead, and that stretched to five when Stolz bogeyed the 12th.

Then the calamity set in and he three-putted from short range for bogey at 13, missed the green on the right at 14 and failed to get up-and-down, and Stolz sensed his fragility, nailing a birdie from close-in at the par-3 15th to move within two shots, and making two great swings and two putts for a birdie at the par-5 16th hole to pull the margin back to a shot.

At 17, Green was in full meltdown, hitting driver into the trees and then seeing his attempted punch out toward the green ricochet off a branch and go sideways.

Stolz lipped out for birdie at the 17th green, but Green’s bogey brought them together at 10-under-par and Taylor, at 9-under, was in the contest, too.

But with the crowd filling the spaces around the putting surface at Richmond’s short 18th, it was Green who played the hole best. He would not allow himself to utterly capitulate.

Green is headed to the Champions Tour qualifying school in America soon and dreams of playing on that circuit in 2023.

“It tests you at all levels, doesn’t it, to be that far in front, and stumble home,” he said.

“Ultimately it would have been nice to continue the way I was going on the back nine, but a couple of little self-inflicted errors I suppose that applied pressure down the closing holes.
“I found it pretty difficult to gather myself and get it under control because things weren’t going my way. It’s nice to do it on the last, obviously.”

Green said he had no idea that his lead had stretched to five shots early on the back nine, but he acknowledged that he was on a roll.

“At that stage, no, I didn’t know. It’s nice to be in that situation but probably as soon as I started to have a bit of a look at things might’ve been the chance for some negativity to come in, the pressured thought. It’s just tough going trying to win golf tournaments whether you’re miles in front or you’re going down the stretch chasing. It was not easy.”

The Victorian left-hander, a 15-year veteran of the DP World Tour who came home a couple of years ago and waited to turn 50 and join the SParms PGA Legends Tour, he is proving to be a dominant force in that arena.

The tournament returns to Richmond Golf Club for the next two years. 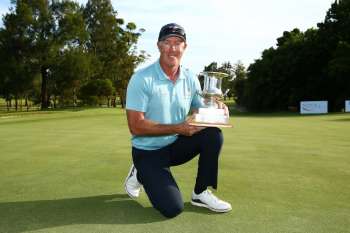