The West Australian was recognised for her two-win season on the LPGA Tour in the United States at a gathering of the who’s who of Australian golf at RACV Royal Pines Resort on Tuesday evening, host venue for this week’s Australian PGA Championship.

Following in the footsteps of fellow West Australian Minjee Lee, Green becomes the second consecutive female recipient of the award, recognition of her major championship triumph at the KPMG Women’s PGA Championship which she followed up with victory at the Cambia Portland Classic.

"It probably wasn't expected from myself or my peers that I would win a major as my first event and to go back two months after and win another one it just shows that you never know what can happen with golf,” said Green.

As she did at Hazeltine National, Australian legend Karrie Webb was present to help celebrate Green’s latest honour which she hopes to use to further inspire juniors at her home club at Mount Lawley and throughout Australia.

"Karrie's done a great job to give the scholarship to us so I'd love to do as much as I possibly can, especially to juniors in WA,” said Green, who was a recipient of the Karrie Webb Scholarship in 2015.

“It's hard for us to go to Aussie Opens, even mens events. I never had that luxury until Karrie took me to the US Open so that's why I'm so grateful for her showing me as much as possible in one week.

"I'd love to open other little girls’ or boys’ eyes to see what it is actually like on tour.

"When I was young I didn't really look up to too many people. Probably my dad at the start because he's the person that plays in my family. He was my first real idol.

“Since then she's been an idol and a big sister.”

Gavin Kirkman, the CEO of the PGA of Australia, said Green’s career-defining year has elevated the young star to hero status and will encourage more juniors to take up golf.

“Hannah has had an extraordinary year. To win her maiden major then back it up with another win on the LPGA Tour demonstrates Hannah is a proven champion,” Kirkman said.

“It’s such a thrill to award this prestigious honour to another talented woman. Hannah’s rapid rise has encouraged more people to take up golf. She has paved the way for the next generation of golfers."

CEO of the ALPG Karen Lunn said Hannah was a shining example of how hard work and dedication can pay off.

“Hannah truly deserves this award for all her hard work. She is an inspiration to a new wave of young girls eager to take up golf,” Lunn said.

“Women’s golf, thanks to Karrie Webb, Minjee Lee and Hannah, has never been stronger.”

Since her success, Green’s popularity has soared to new heights, the demands on her time one of the trappings of such fame.

Due to celebrate her 23rd birthday on Friday, Green has recently joined the IMG management stable to coordinate her various commitments, her dedication to the promotion of golf in Australia to continue to be a high priority.

“I'll definitely say yes to as many things as I can do,” said Green.

“Playing Vic Open and Aussie Open I've already got requests to do lots of clinics and media things during both of those weeks.

"I want to make sure that I can do as much as I can those weeks because I love playing at home and that's the only time I really get to play in front of a home crowd.

"Everyone's really great in supporting me out on the golf course so I want to give back as much as possible.”

Her commitment to Australian golf will likely include representing her country at the Tokyo Olympics in July next year alongside Minjee Lee, the blazer she tried on during the men’s Australian Open a fortnight ago further motivation to carry her 2019 form into the new year.

"I won't start my season until February at the Vic Open but I'm more motivated than ever because I now know what it tastes like and I want to have it again,” said Green.

"I've been trying on some stuff and filing out some forms so it's been really exciting. I can't imagine what it's like for other athletes competing just for the Olympics.

“I don't really know that I believe golf should be in the Olympics but if I have the opportunity to represent my country and possibly win a gold medal I'll definitely want to be there.” 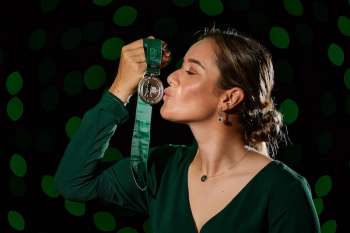