Honours even as the new Adare Manor golf course is opened.

It was honours even as the combined talents of Rory McIlroy & Paul McGinley and Padraig Harrington & Shane Lowry cut the ribbon on The Golf Course at Adare Manor, set to quickly become one of the world’s most celebrated layouts.

With each pair returning a four-ball better ball strokeplay total of four-under-par 68, the match was witnessed by 1,500 spectators and marked the official opening of the wholly reconstructed Tom Fazio-designed championship course at Adare Manor. As a result of their joint success, each pair will donate €250,000 to their chosen charities, including The Rory Foundation, The McGinley Foundation, Temple Street Children’s University Hospital and the Padraig Harrington Charitable Foundation.

Following the match, the players were quick to praise the quality of the golf course, which will now be fully open for play among members and guests, and complement the recently refurbished Manor House.

Four-time Major Champion, Rory McIlroy, said: “The Golf Course is absolutely incredible. With the weather we’ve had for the last few months, to have a course presented like this is phenomenal, so that’s credit to all of the work of the greens staff over the winter. It was a fantastic day.”

One of the most significant developments in Irish golf in recent years, the Exhibition Match drew much attention from global media, who earlier attended a press conference where it was announced the high-profile JP McManus Pro-Am will return to Adare Manor in 2020. The star-studded occasion, which has previously attracted the likes of 14-time Major winner, Tiger Woods, and World No.1, Dustin Johnson, and raised over €100 million for charity in five previous editions, will take place over The Golf Course at Adare Manor from 6-7 July 2020.

Following a two-year reconstruction commissioned by the ownership of the Adare Manor resort, the McManus Family, The Golf Course at Adare Manor is now open to the golfing world. In bringing to life the 7,509-yard championship layout using practices and products like no other in history, the Fazio Design team has established a course capable of hosting the world’s most prestigious golfing events.

Colm Hannon, Chief Executive Officer of Adare Manor, said: “The Exhibition Match to officially open The Golf Course at Adare Manor has been a huge success and we owe a great deal of thanks to each of the players – Rory, Padraig, Paul and Shane – who have made this such an entertaining and memorable day for all of our guests.

“With the support of the McManus Family, we are also delighted that this occasion will benefit a number of very worthy causes and create an instant legacy for the golf course.” 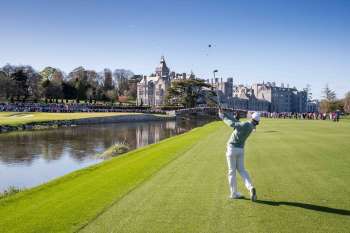