Last month approval was given for the construction of what might become the most spectacular golf course in the world. It’s on King Island, in the middle of Bass Strait.

The course is being built at Cape Wickham on the island’s northwest tip. Cape Wickham is, quite simply, the most breathtaking and dramatically diverse piece of golfing ground I have ever seen. It has the very real potential to put King Island on the golfing map, and to attract visitors from all over the world.

Those visitors will be following in the footsteps of Scottish explorer John Clements Wickham, after whom the area is named. Wickham commanded the HMS Beagle as it toured the west coast of King Island back in 1838. This was the same HMS Beagle that a few years earlier had accompanied Charles Darwin on his celebrated tour of the Galapagos Islands.

While Wickham’s tour of King Island had been relatively uneventful, for other vessels around this time it was a different story. A few years prior the convict ship Neva hit a reef off the Cape Wickham coastline and more than 220 people perished, mostly women. The 1845 shipwreck of the Cataraqui further south remains Australia’s worst maritime disaster, and was the incident that led to the construction of the Cape Wickham lighthouse. For golfers this was an important milestone.

The Cape Wickham lighthouse is no ordinary lighthouse. At 48 metres high it’s Australia’s tallest, and one of only three stone lighthouses in the southern hemisphere that stretch above 150 feet. It will greet golfers as they first approach the site, and stand sentinel above them as they play the closing stretch of holes along the shoreline. The lighthouse can be seen from most holes, and will provide an ideal aiming point on a number of drives and approach shots. So striking is the lighthouse structure that if it were the only attraction at Cape Wickham it alone would make the place worth visiting.

A kilometer south of the lighthouse, however, is a north-facing bay known as Victoria Cove. Golfers catch a glimpse of this cove and its turquoise waters whilst standing on the 1st tee, but will have to wait until the final hole to play around its curving beach. Those who push or slice shots on the 18thhole will be able to attempt a recovery from right off the sand. Walking off the final green they then retreat to a clubhouse and lodge precinct set atop a bluff that overlooks Victoria Cove and faces due north, straight towards the lighthouse. It’s a setting that manages to render most visitors to the region speechless.

Again, if Cape Wickham’s only drawcards were its lighthouse and north-facing beach it would be an undeniably beautiful golf site. Instead there is also a dramatic rocky headland known as Cape Farewell, enormous sand dunes towering up to 70m in height, a series of glorious inland valleys and uninterrupted views of Bass Strait and a pair of distant offshore islands. Like Pebble Beach in California, eight of the holes are set right along the ocean, whilst another two end with greens pressed back against the sea.

Given Wickham’s jagged coastline and golfer’s interaction with the sea, comparisons with places like Pebble Beach are somewhat inevitable. They are also inaccurate. Unlike at Pebble Beach, here the inland holes are almost as dramatic as those along the coast. These ‘filler’ holes tend to occupy the most interesting ground on the property and work by adding variety to the experience and by linking spectacular, but disparate, coastal settings together. From the 6th tee through to the 11th tee, for example, the golfer experiences the full majesty of Bass Strait by looking south, north and directly toward the island’s western shoreline. In each case the view is completely different. The inland holes through this stretch are destined to be among the most iconic on the course, particularly the short 7th and the longer 8th, played first across a scrubby plateau and then through a broad sheltered valley.

Earlier in the round, the 4th and 5th work similarly well to direct golfers away from the rocky cliffs of Cape Farewell and into the softer southern dune land. The multi-route lighthouse par four 4th is especially memorable. As is the 14th, which enjoys expansive beach views but will be best remembered for an approach shot played toward the lighthouse and into a naturally sunken punchbowl resting beside an enormous sand hill.

The man responsible for the routing and design of the golf course at Cape Wickham is American architect Mike DeVries, who has relocated his family to the small island to personally oversee construction of his golf holes. DeVries describes the land as the best he’s ever seen, adding “the combination of the Cape Farewell headland, Victoria Cove, Cape Wickham Lighthouse, views to ocean and shorelines, as well as the prospect of direct golfer interaction with the water makes this the most amazing site I have witnessed, existing or imagined.”

Adds DeVries, ‘I’m very excited to be working in Australia and in particular on King Island. The opportunity is a great one because it’s a beautiful site and all the people associated with the project have been a pleasure to work with.’

Just as pictures fail to do justice to the scale and beauty of this site, so too does a quick glance at DeVries’ course map only tell part of the golfing story. The sequencing and flow of his holes together with the nuances of the terrain being used are what have excited the team working on the layout. This is very much an old-fashioned golf course, with easy green-to-tee transitions, constant directional shifts, great short, medium and long hole variety and a steadfast emphasis on building holes that use, rather than fight, the natural terrain.

The real strength of the routing, though, is the use of the ocean and the manner in which DeVries was able to push so much golf against the sea without compromising walkability or playability, or needing to use views gratuitously to disguise problems. The views across the property are spectacular, but most of his holes would work equally well without any scenery at all.

Furthermore, whilst golfers can see Bass Strait from every single hole the variety of vistas is quite extraordinary. Some holes rise along the coastline, whilst others fall. Some play due west toward the water, others head north, southwest or southeast along its shoreline. One par three on the back nine is almost in the ocean. There are holes built across rocky promontories and others set down along pristine beaches. If the views alone weren’t enough, there are also sandy ridges and dunes that bulge dozens of metres above some of the golfing corridors. Those underwhelmed by the golf available here, or the sheer scale of the surrounding countryside, are truly hard to please.

Despite the very obvious appeal of the Cape Wickham area, this remains a high-risk, remote golf venture and the project will only work if the course and ancillary infrastructure can match the crazy high standards of the virgin terrain. That’s the aim of the development team, who were only granted permission to build the course in June, once migratory shearwater birds, who live on the site over summer, had left and headed toward the northern hemisphere. These same birds return later in the year, when most of the construction works will need to be completed. The nightly arrival of these birds back into Wickham is certain to become a genuine attraction of the development.

It’s important to note here, that I have a personal connection to this project and have been working with the development team as a consultant for the best part of 18 months. Part of my job has been to help overcome the regulatory issues involved in a sensitive coastal project in Tasmania, with the rest of the time spent working with Mike DeVries and the developer to figure out how to shape an extraordinary property into a coherent, walkable golf course. We think we’ve succeeded and expect to be roundly condemned if unable to convert this magnificent ground into a magnificent golf experience. 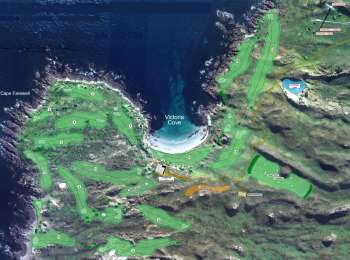 the routing plan for the new course at Cape Wickham 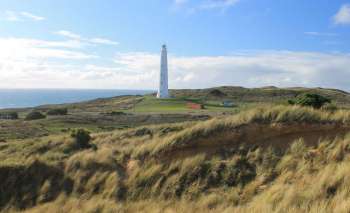